Today being Koninginnedag (Queen’s Day), the national holiday of the Netherlands, I think it’s time I wrote something about the country that all four of my grandparents left to start new lives in Canada.

Many years ago, I was standing in line at Amsterdam Centraal Station, the city’s main train station, waiting to change some money. (This was back in the olden days, before ATMs.) An American came up behind me, asked if I spoke English, and we started chatting, as backpackers do, about where we’d been and where we were going. I explained to him that I was nearly finished my trip, and was going to spend a couple of weeks in the Netherlands before returning home to Canada.

“I have some relatives to visit,” I explained.

“Oh?” I said. He then began to tell me about the Red Light District, which I quickly gathered was about all he had seen of Amsterdam.

“But have you seen anything else of Holland?” I interrupted him.

“Is there more to see besides Amsterdam?” He sounded surprised. “What?”

“Oh! Is it pretty? Are there mountains?”

I was struggling to come up with a polite response when, just then, it was my turn at the change window. The conversation ended rather abruptly as I turned my back to him. “Idiot,” I muttered to myself. “Are there mountains?”

I know the Netherlands isn’t high on most people’s lists of countries to visit. Nor do I expect it to be. But I do want my readers to know that, for a tiny nation, the Netherlands has a whole lot of country if you take the time to venture beyond Amsterdam. I took this photo one day in August 2007 when I was cycling outside of Zaandam, a town just north of Amsterdam.

No mountains. Just a lot of flatland. Beautiful, isn’t it?

Through My Lens: Cherry Blossom Time 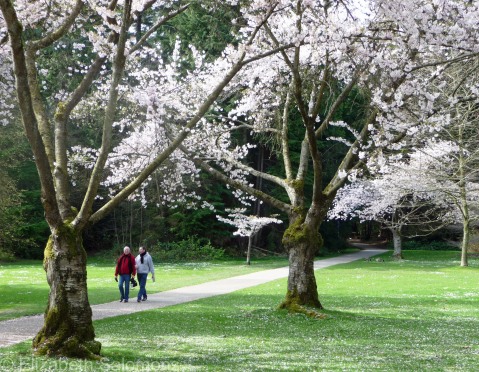 Vancouver has almost 40,000 cherry trees that burst into bloom every March and April. It’s my favourite time of year.

On my first-ever visit to Paris, I navigated the sidewalks as if I was playing a game of hopscotch. There was doggie-doo everywhere you looked (or, to be more precise, everywhere you stepped but didn’t look).

Fourteen years later, I was back in Paris, this time with my dad. The doggie-doo situation was much improved. But we chuckled together one night at dinner when we realized the incredibly stylish and well-manicured French matron dining alone at the table next to us had a small canine companion lying at her feet. We were most definitely not in Kansas anymore!

I thought about that dog the first time I read C’est la Vie by Suzy Gershman, which I read shortly before reading Almost French. C’est la Vie and Almost French nicely bookend each other because both are written by women who move to Paris at the urging of a man. And ― once each author is settled and starts to feel “almost French” ― each adopts a small dog (how French of them) that they take with them everywhere (how very French of them!). In Gershman’s case, this includes La Galerie at Hotel George V. Clearly a dog’s life in Paris is no hardship at all.

Suzy Gershman moves to Paris six weeks after the death of her husband, who has died only six weeks after being diagnosed with Stage IV lung cancer. She calls herself the Runaway Widow, and she lives in a hotel while searching for an apartment she can call home. This proves more difficult than she expects, but eventually she finds one in the 17e arrondissement. She then proceeds to set up house.

Gershman’s day job is writing shopping guides for cities all over the globe. Hence, she goes into incredible detail when describing the shopping she does to furnish her apartment. It’s natural she writes about what she knows, but the book is missing the in-depth analysis of French culture that I so enjoyed in Almost French. If Almost French is steak et frites, C’est la Vie is tarte tatin. Both add different elements to the meal, but, if I have to choose, I’m a meat-and-potatoes kinda gal.

However, I will be eternally grateful to Gershman for introducing me to Monoprix, the combination grocery-department chain store where I did most of my shopping when I was living in the 20e arrondissement. It was my favourite place to shop and I still miss it.

One of the women in my Book Club is going to France with her family this summer. She knows I read a lot of travel memoirs, so at our last meeting she turned to me and asked, “Can you recommend some books about France?”

Can I recommend some books? About France? (Is the Queen English?)

Almost French was my favourite of the shelfful of books I devoured before my last trip to Paris. The author, Sarah Turnbull, is an Australian journalist who meets a French lawyer when they are both in Bucharest for work-related reasons. A couple of months later, she takes him up on his invitation to visit him in Paris ― and never leaves.

Travel memoirs written by wealthy retirees who move to Provence (or Tuscany … or Greece … or …) and fix up old farmhouses are a dime a dozen. For that reason alone, I found Almost French refreshing because it was written by someone my own age living in a large city. I also enjoyed it because it was written by someone from a country with enough cultural and historical similarities to my own for me to relate to her observations about the differences between Australia and France.

But mostly, Turnbull’s memoir stands out from the dozens I’ve read because it is so painfully honest. She is open and frank about the daily grind and frustration and loneliness of adjusting to a new life in a new country. Travel memoirs are usually quite humourous ― often, I suspect, to deflect some of the pain that is always part of adjusting to life in a new and often confusing culture. And Turnbull’s book does have its funny moments. But she uses her stories of linguistic and cultural misunderstandings as an opportunity to write what amounts to a sociological study of the Parisian mind-set ― and she does so in a very real and down-to-earth manner.

For instance, her descriptions of various dinner parties are an obvious opportunity to talk about the French love and passion for food. But she uses these evenings as a window on everything French ― from politics to gender relationships to social habits to the proper way to present and serve a meal. Her weekend visits to the countryside with her French lawyer to visit his father lead to a treatise on how sentimental the French are about the countryside. And she becomes adept enough at reading the French psyché to understand that “Ce n’est pas possible” doesn’t always mean “It’s not possible.”

Another reason her memoir is so distinctive is that her experiences, although specific to Paris in the mid-1990s, are universal. Anyone who has picked up her life and started over in another country, or (dare I say it?) another region of Canada, will be able to relate to her book. Cultural differences between two regions of the same country might be subtle but significant enough to make you ask, “Where am I?” And although I lived in Paris for only three months, Turnbull’s descriptions of Parisians brought smiles of recognition to my face.

By the time she reaches the end of her book, Sarah Turnbull has lived in France for six years, and proves herself almost French by adopting one of the most clichéd of Parisian lifestyle choices ― she gets herself a little dog with as much personality as any French chien.

If you’ve ever contemplated moving to a foreign country, or have already done so, I highly recommend you read Almost French.

One of my best friends, a school teacher from Toronto, decided to spend this year’s spring break with me in Vancouver. She played tourist in the city while I worked, but then, mid-week, we set off to Whistler for a mini-break.

One of the best things about living in Vancouver is how easy it is to get out of Vancouver. I often take my out-of-town guests to Whistler for the day. Lunching in Whistler, I call it.

Whistler is a beautiful two-hour drive from Vancouver along the Sea to Sky Highway ― perhaps one of the most scenic drives in Canada. A couple of years ago, one of the friends I took Lunching in Whistler was so overwhelmed by the beauty on the drive up, she was speechless. You’d recognize the scenery even if you’ve never been to British Columbia ― many a car commercial has been filmed on this highway dramatically juxtaposed between mountain and ocean.

This time, I suggested to my friend that we do some skiing and stay over. Although many of my friends drive up to the resort for a day’s skiing and return home the same night, I thought it would be nice if we were able to relax after a day on the mountain instead of driving back to Vancouver the same night.

We arrived on a Tuesday afternoon in the middle of a snowstorm. We skied Wednesday, with snow lightly falling around us most of the day. A Texan we met on the gondola said it hadn’t stopped snowing since he arrived the previous Sunday. After our return to Vancouver on Thursday, we happened to catch a story on the local evening news in which another Texan (or the same one, perhaps??) told the reporter that he had come to Whistler as there was no snow at the American ski resorts this winter.

Whistler Village was a Winter Wonderland that met all our expectations. Here, take a look.

Photo op along the Sea to Sky Highway

Snow-covered trees along the Sea to Sky Highway 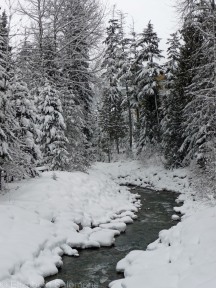 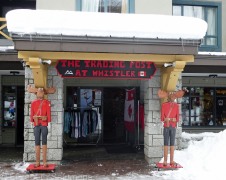 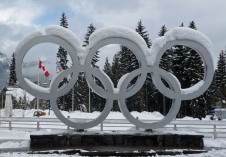 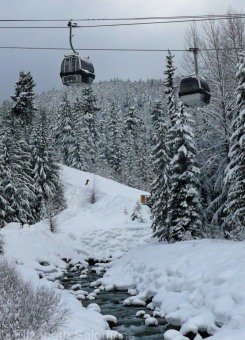 On our way to the Blackcomb Gondola

It was busy on the mountain …

At the Irish Pub ― where else would we go for our après-ski two days before St. Patrick’s Day?

… but that same afternoon, we were walking along the Stanley Park seawall in brilliant sunshine (which is why it’s called the Sea to Sky Highway)
April 1, 2012

Through My Lens: Basilique Saint-Denis

Today is Palm Sunday, and I’m posting a photo of the stained glass windows from the apse of Cathédrale royale de Saint-Denis, or Basilique Saint-Denis.

I first heard about Saint-Denis from my Dutch cousin in Amsterdam. After she showed me her photos and postcards, I decided I had to see this church for myself one day. Fast forward ten years, and I finally made it here on Boxing Day 2010.

Saint-Denis is a massive church located in the Parisian suburb of Saint-Denis, which you get to by travelling to the second-last stop of Métro Line 13. It was the first major structure to be built in the Gothic style of architecture and was made a cathedral in 1966.

What’s so unique about Saint-Denis is that most of France’s monarchs ― from Clovis I (died 511) to Louis XVIII (died 1824) ― are buried here, including the two who lost their heads during the French Revolution (Louis XVI and Marie Antoinette). A total of 42 kings, 32 queens, and 63 princes and princesses are entombed within the cathedral.