Through My Lens: September 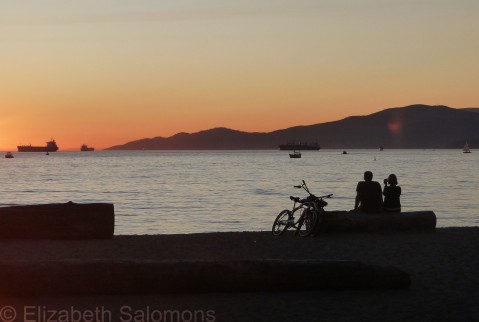 As much as I love to travel, I always love to be home again. Especially after a longer time away.

I was gone for six weeks this time, what with my house-sitting stint in Burnaby and my mad dash around the Eastern Time Zone. Now I’m back in my own space, in my own neighbourhood, enjoying all that I love about work and play in Vancouver.

Both this year and last, Vancouver endured a miserably cold, wet spring, but a fabulously long and hot summer. The highs this past week were an incredible 27°Celsius ― that’s warm for Vancouver at any time of the summer, but almost ten degrees above normal for late September. And so, everyone is spending as much time outdoors as possible; the beaches, the parks, and the seawall are filled with people enjoying the last gasp of summer. We all know it won’t last much longer. 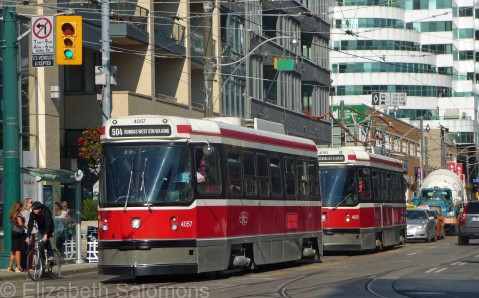 Nothing says “Toronto” to me as much as its iconic red street cars.

For several years, I rode the 504 King car every day on my way to and from work, but when I first moved to Toronto, it took me a while to figure out where and how I was expected to board the street cars. The only street cars I was familiar with were the trams in Amsterdam. In that city, there are raised concrete platforms along the tram tracks where you stand to wait for the tram.

Although some street-car stops in Toronto have platforms similar to those in Amsterdam, most stops are marked with a small sign attached to a light pole. The signs are easy to miss if you don’t know where to look. You wait on the sidewalk beneath the sign, just as you would wait for a bus at a bus stop. The street car pulls up, traffic in the lane between the street car and sidewalk stops, and you step out into the road to board the street car.

Street cars have been operating continuously in Toronto since 1861, and Toronto’s system is the largest in North America in terms of ridership, number of cars, and track length. Its eleven lines, most of which crisscross downtown and all of which connect with the subway, have a daily ridership of over a quarter of a million people.

I’m on the last leg of my jaunt around the Eastern Time Zone, which means if it’s Wednesday, this must be Toronto.

Unlike my Baltimore leg, which was all about first impressions, my time in Toronto is all about memory. I used to live in Toronto and on each return visit, as the years go by, I am amazed by how much I remember and by how much I have forgotten. Buildings and streets I haven’t thought of in years come back to me with immediate familiarity the instant I see them. But then there are other times when I have to reach back into the recesses of my memory and think, “Have I been to this restaurant before? Do I remember how to get from here to there?”

There are a lot of things about living in Toronto that I miss when I’m not here. Like street cars. And patio restaurants. Upper Canada Lager. Victorian architecture. And how you can sit outside till well past dark on a September evening and not feel chilled.

And then there are the things that drove me crazy about living in Toronto. Like the traffic. And the smell of garbage lining the streets in front of the storefronts at the end of a hot summer’s day. The traffic. That there are people here who think when you say “out west,” you mean Mississauga.

And did I mention the traffic?

Each city has its own advantages and disadvantages and I was lucky enough to experience Toronto’s. It took me a long time to figure out how to live in this city, but once I had it mastered, I was happy to call it home for as long as I was here. 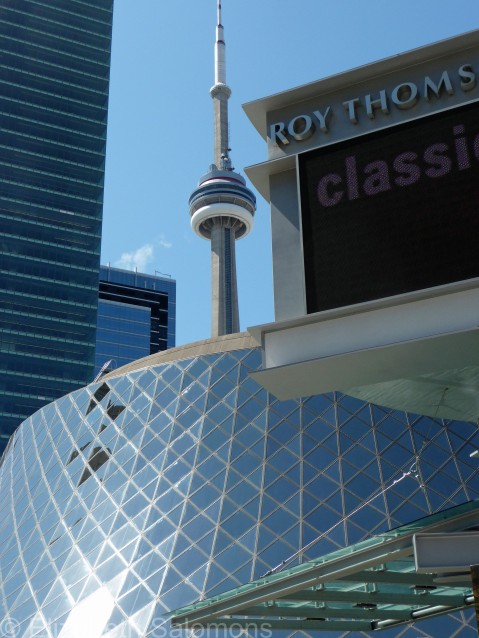 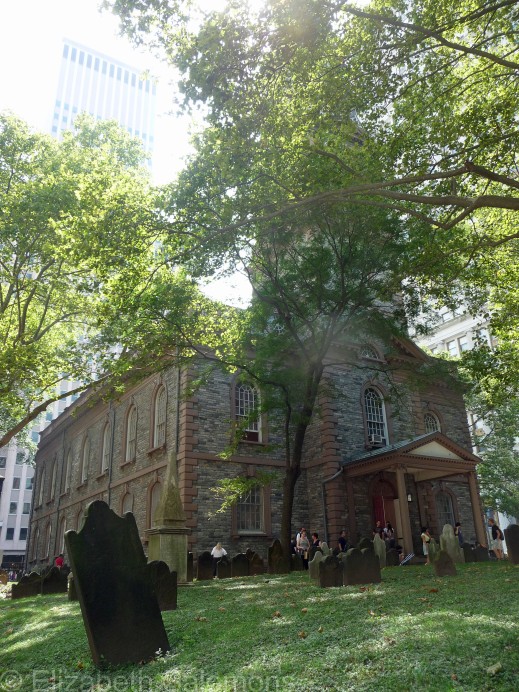 One of the most impressive buildings I saw during my recent visit to New York City was St. Paul’s Chapel in Lower Manhattan. The Twin Towers used to stand next door to this tiny church, and One World Trade Center is now under construction across the street from it. 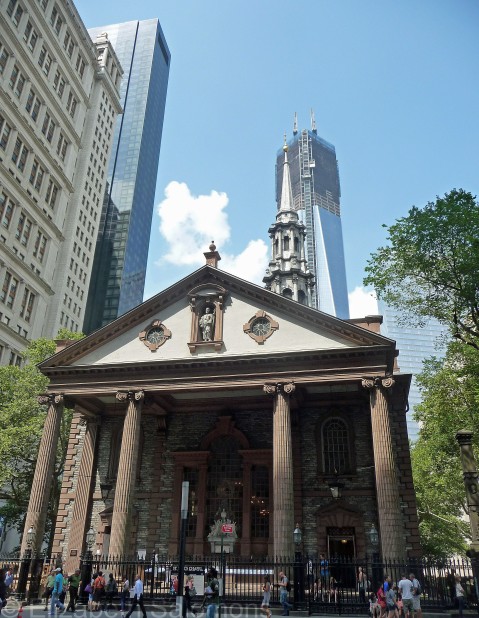 St. Paul’s Chapel was built in 1766 and is the only Colonial-era church left in Manhattan. George Washington worshipped here on April 30, 1789, after he took the oath of office to become the first President of the United States. 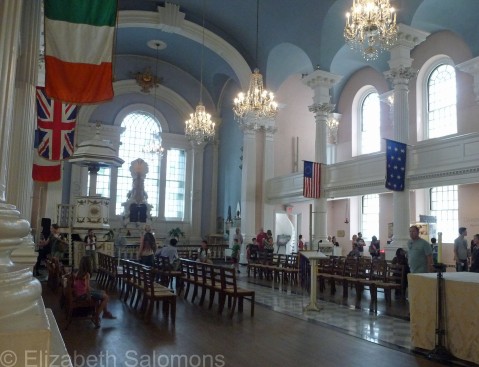 The building survived the Great Fire of New York in 1776. It also survived the September 11 attacks, and suffered no damage at all other than being covered with dust and debris. It is now known as “the little chapel that stood.” 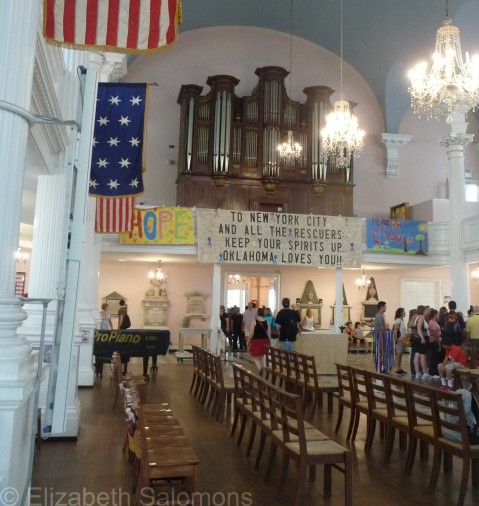 St. Paul’s became a place of refuge and rest in the days and months following the destruction of the Twin Towers, offering round-the-clock care for the thousands of volunteers working at Ground Zero. Massage therapists, podiatrists, and chiropractors, as well as parish staff, ministered to the firefighters, police, and construction workers. Today the chapel contains several memorials to those first responders and volunteers.

I’m going to leave New York for a while, and move on to Baltimore, which is where I was for most of last week. Baltimore, I discovered, has the dubious moniker of “Charm City.” Apparently the mayor of Baltimore asked some advertisers to come up with a marketing slogan to help the city improve its image (this was back in the mid-1970s when Baltimore’s image badly needed improving) and that’s what they came up with. Somehow, it stuck.

My introduction to Baltimore wasn’t quite so charming. As I was thinking about what to write for this post, I realized it’s been a while since I’ve experienced a first impression of a city. Most of my travels lately have been to cities or countries I’ve been to before, some of them multiple times. Impressions then are as much about memory (of previous visits) as they are about new experiences.

There is nothing, however, like the first impression. Impressions can and do change the longer you spend in a place, or the more times you return. But you can never again have a first look at a city once you’ve been there.

In short: I’m no longer a Baltimore virgin.

My first glimpse of Baltimore on the bus from New York was of streets after streets of “the vacants” — the boarded-up row houses you see on the TV show The Wire. It’s one thing to see images like that on a TV show; it’s a kick in the gut to see them in real life, and to see real people (as opposed to actors) sitting on the stoops of those boarded-up houses as you drive by. I don’t know that I’ve seen similar neighbourhoods anywhere in Canada. Maybe they exist, and I’m just ignorant about the realities of poverty in Canada. But I don’t think so. Not that many houses and not that many streets.

Baltimore is south of the Mason-Dixon line. (Although Maryland was part of the Union during the Civil War, it contributed troops to both the Union and the Confederate armies.) So … that puts Baltimore pretty far south. The climate is hot, humid, and pretty uncomfortable in August. (And that was after it had cooled down from earlier in the summer, my sister informed me.)

The only reason I was in Baltimore was to visit my sister, and the only reason she lives in Baltimore is to study at Johns Hopkins University. She lives near the university, which is slightly north of downtown Baltimore. Navigating Baltimore’s public transit system once you’re out of range of the Charm City Circulator, the bus that travels around the downtown core and into select neighbourhoods (Fast! Friendly! FREE!), can be frustrating. It strikes me that life in Middle America if you’re below a certain income level can be really, really difficult.

Sports draw a lot of tourists to Baltimore, I’m told. Boston fans come down for the Orioles–Red Sox games, and the Preakness Stakes is run every May at Pimlico. The Inner Harbor has a wide variety of activities and restaurants to suit a wide variety of tastes, and there are some interesting neighbourhoods outside of the downtown core, such as hipsterish Hampden, and historic Fells Point along the waterfront. The local microbrew (Dogfish Head) is very hoppy, the local specialty (crab cakes) is very tasty, and Bawlmorians put Old Bay Seasoning on everything. 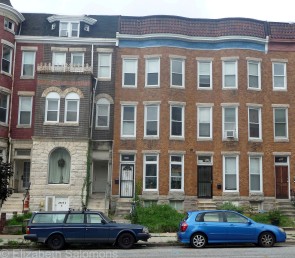 Baltimore is the largest seaport in Mid-Atlantic United States. 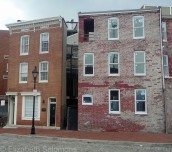 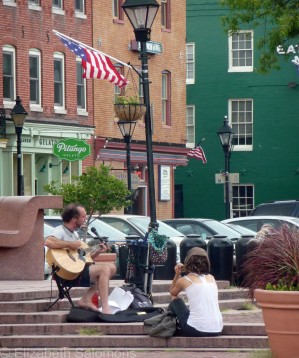 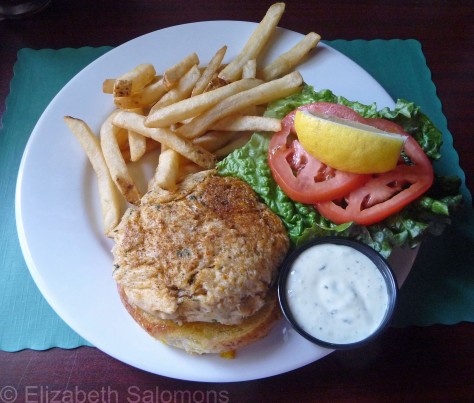 I’m sure you are beginning to wonder if all I did in New York was explore its parks — and I assure you I did a whole lot more — but I have to finish this series of posts about New York parks with just one more. Then I will move on. Promise.

Central Park is the jewel of New York’s parks, and one of my favourite places in New York. Each time I visit the city, I make sure to save an afternoon to wander about the park.

At 843 acres and with a perimeter of six miles, it covers six percent of the island of Manhattan. There are 21 playgrounds, 36 bridges and arches, 9000 benches, and 24,000 trees. It opened in 1857, and is the most visited city park in the United States, with 38 million people visiting it every year. (That’s 38 million, folks. Every year.)

This year, I was one of them. 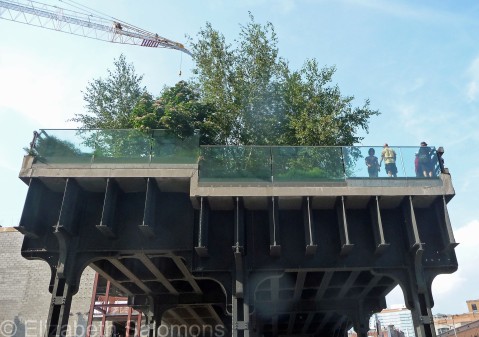 The High Line is one of New York’s most unique parks. It’s an elevated park that runs along a former freight rail line. I missed its opening by a matter of weeks on my last visit to New York, and it was the park I was most excited to see on this visit to New York. 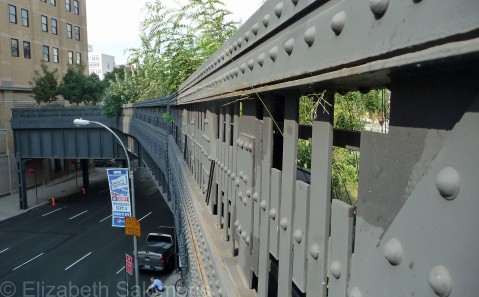 The original rail line was first built at street level, back in the 1850s, but as traffic increased, so did the number of accidents between street traffic and trains. It was made elevated in the 1930s to improve safety, and ran right through factories and warehouses to allow for easy delivery of the freight. 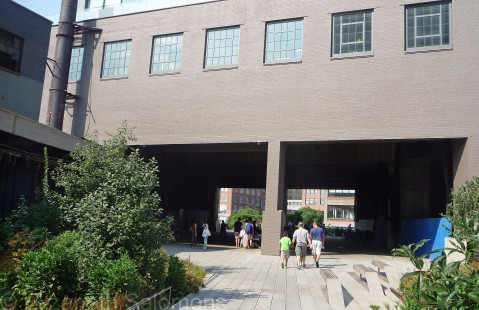 Rail traffic dropped after the 1950s, and stopped altogether in 1980. Part of the line was demolished. 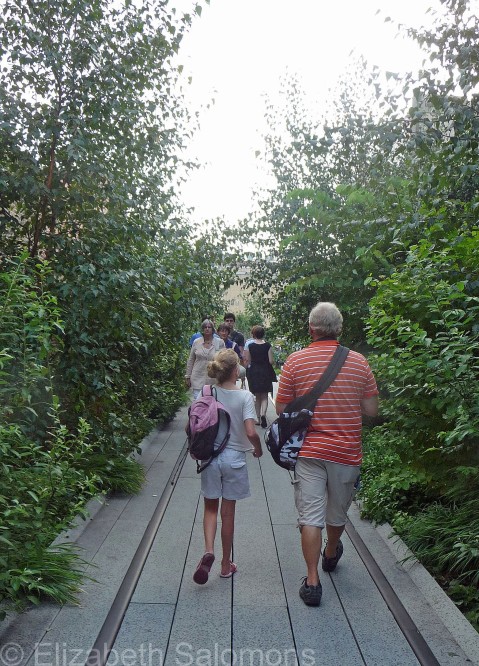 In 1999, Friends of the High Line was formed. The non-profit organization worked to prevent the demolition of the rest of the line and to turn it into a park. The first section opened in 2009. 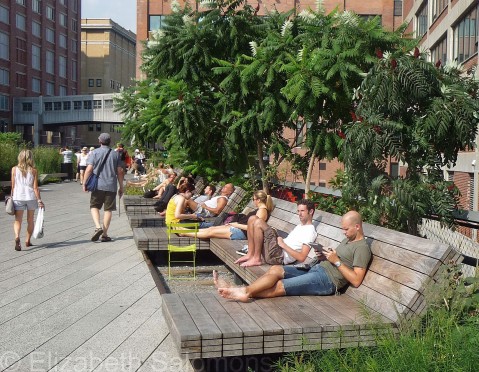 The High Line runs between 10th and 11th avenues from Gansevoort Street in the Meatpacking District, past Chelsea, up to West 30th Street, with stair and elevator access at various intervals. 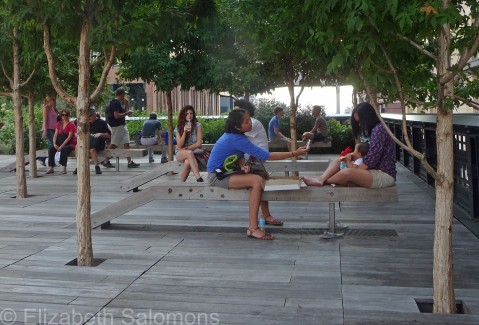 There are plenty of places to sit. 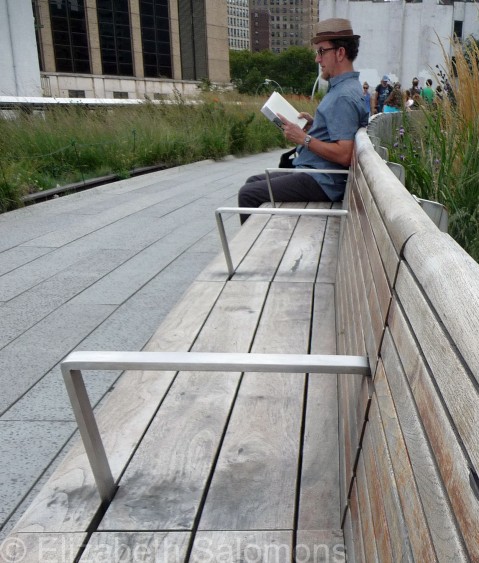 And lots of interesting vegetation, including many species that grew naturally along the rail line before its transformation into a park. 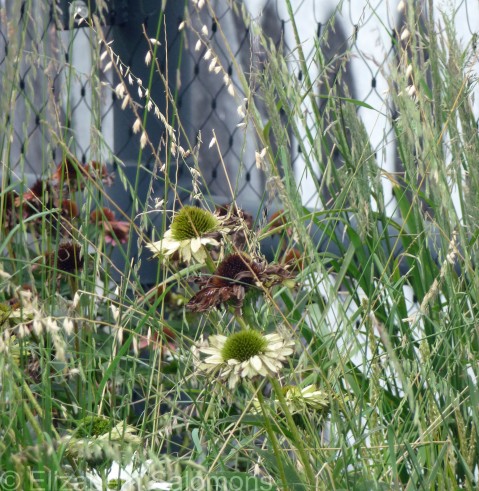 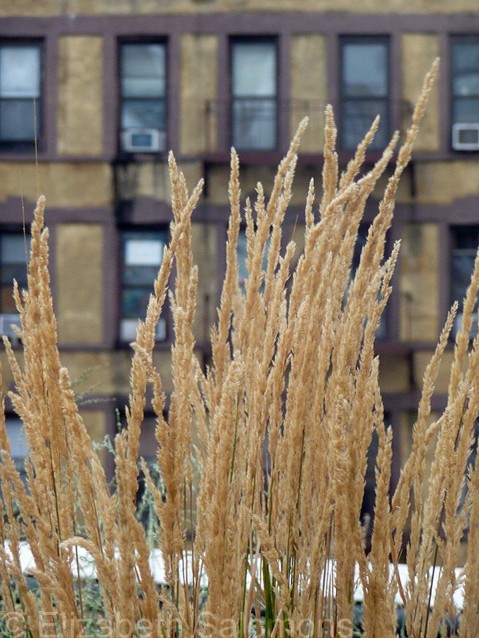 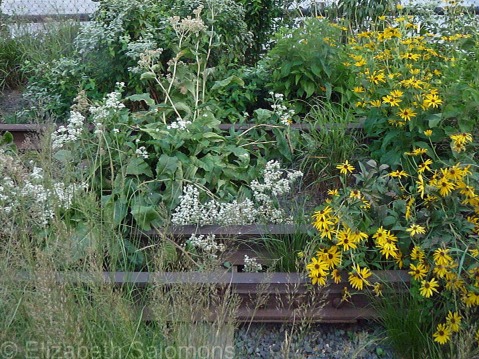 I spent two days exploring the High Line — one afternoon my friend and I met at the bottom end and worked our way north, and the second afternoon I started at the top end and walked to where we left off the previous time. And then we went back a third time to see it lit up at night. I know I will be back to visit next time I’m in New York. 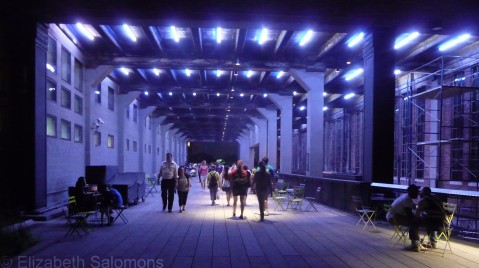