If Canada Place transformed Vancouver’s look the most out of all the legacy landmarks left behind by Expo 86, then BC Place is a close second. It opened in 1983, has a capacity of 54,500, and is home to two of Vancouver’s professional sports teams: the BC Lions and the Vancouver Whitecaps. BC Place was also the venue for the opening and closing ceremonies of the 2010 Olympics. After the Olympics, it got a new roof. It is the largest cable-supported retractable roof in the world and ― in my opinion ― gives BC Place a much-needed update to the marshmallow look it had before.

Through My Lens: Pender Island Sailboat

Yeah, I know. Summer’s over. I can no longer deny it.

But here’s a summer photo anyways. Just to say “until next year.” I took this from Pender Island a few years ago.

Through My Lens: Float Planes

There was a wee bit of excitement in Vancouver today about a couple of visitors. The Duke and Duchess of Cambridge are in British Columbia for an eight-day visit and today was their whistle-stop tour of Vancouver.

What I find amusing about the media coverage of the Royal Tour is how every story highlights that the Royals are being flown around the province by float plane. Float planes are, to put it mildly, a way of life in coastal BC. For some communities, it’s the only way in or out.

I took this photo of the planes docked at the Vancouver Harbour Flight Centre (aka Downtown Vancouver’s seaplane terminal) last summer. The Duke and Duchess arrived here from Victoria this morning ― by float plane.

Through My Lens: Trincomali Channel

Another mini-break on Salt Spring Island means another photo of a spectacular view. I took this from Channel Ridge where my friend and I went to walk her dog. We’re looking east over Trincomali Channel towards Galiano Island.

And here’s a cool bit of trivia: Trincomali Channel is named after HMS Trincomali, a British warship built in 1816 that is now docked in Hartlepool, England. What’s the connection between HMS Trincomali and BC? The ship was stationed at the Esquimalt Royal Naval Dockyard near Victoria in the 1850s. The dockyard was an important station of the British Royal Navy from 1842 to 1905 and is now home to the Royal Canadian Navy’s Pacific Fleet.

Through My Lens: Herbs, Herbs, and More Herbs

And … it’s that time of year again. Tomorrow I head off to Salt Spring Island for my “island fix” ― and it just so happens that it’s also the weekend of the Salt Spring Island Fall Fair. It was during my visit to the fair two years ago that I snapped this photo.

I don’t know if my friend and I will make it to the fair this year, but I do know I am looking forward to some island time. 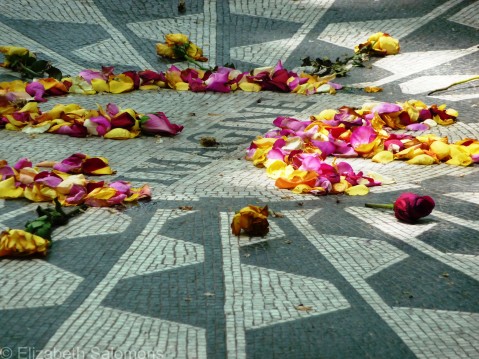 Imagine there’s no countries
It isn’t hard to do
Nothing to kill or die for
And no religion too
Imagine all the people living life in peace, you