When my sister and I were ready to move on from Toledo, we headed to Ávila. Ávila is a little farther from Madrid than Toledo, but is northwest of Spain’s capital, whereas Toledo is to the south.

Like Toledo, Ávila has an impressive cathedral and monastery, not to mention a basilica — all of which I’ve posted about in the past. But what stood out upon our arrival were the massive, stone walls, with their eight gates and 88 towers.

These walls form an irregular rectangle around the medieval centre of Ávila.

Parts of the wall have been restored so you can walk on it.

We found ourselves staying in a small hotel just inside those walls, next to the cathedral. To the best of my memory, it was just around the corner in this next photo.

Although we didn’t know it then, my sister would find herself back in Avila some years later to do historical research. Naturally I came back to visit her. This was the street where she lived for a year.

Keep walking, and you came to this gate.

Walk through the gate, and this is your view.

Not too shabby, eh?

I soon learned that in Ávila you can’t avoid the sixteenth-century mystic and saint, Teresa of Ávila.

Born into nobility, Teresa joined the Carmelites at age 20. She sought a more reclusive life than was available with the Carmelites, however, so she established a reformed order of Carmelites. They made their home here, in the Convent of San José, which Teresa founded in 1562.

It was in Ávila where I first noticed the storks that are ubiquitous throughout Spain — this church steeple has four nests in all. And so I will leave you with this pro tip: when in Ávila, always look up.

Not two years after my weekend in Barcelona, I got the chance to make another last-minute trip to Spain. This time the invite came from my sister, who was there for a month of study.

And so, once again within a manner of weeks, I was on a plane, this time to Madrid. This time, however, I did a bit more upfront planning than I had managed to do for my weekend in Barcelona. Plus, I had my sister already on the ground, so to speak. We decided to do a circuit around Madrid that would take us into the two autonomous communities of Castile La Mancha and Castile and León.

The best part? We had two glorious weeks.

This was our first stop.

Toledo is an hour south of Madrid by train, and its medieval centre is a short walk from the station. As we walked across the Roman-built arched bridge (the Puente de Alcántara) and through the gates of the thick stone walls, I couldn’t help but think about all the pilgrims who had, since the Middle Ages, been arriving at the city in much the same way.

Our accommodations, I am sure, were much more luxurious. We got a room with a view — of the cathedral, no less, and a sea of ochre-coloured rooftops.

Toledo, we quickly discovered, is a maze of narrow passageways. And I soon learned that when a shop window called out to me or I caught sight of something I wanted to photograph, I had to stop because the chances of finding my way back to the same spot again were highly unlikely.

Toledo is also compact — we were never more than a 15-minute walk from our hotel — and we saw most of its highlights in a day and a half.

Namely, the Cathedral of Toledo, built between the thirteenth and fifteenth centuries …

… and the Monastery of San Juan de los Reyes, with its impressive two-storey cloister …

… and the Mudéjar-decorated ceilings of those cloisters, adorned with the coat of arms of Los Reyes Católicos (the Catholic Monarchs), Ferdinand II of Aragon and Isabella I of Castile, whose marriage in 1469 created a dynastic union between the kingdoms of Aragon and Castile. (Pay attention to their names. You hear them a lot when you travel through Spain.)

The monastery was intended to be the final resting place of the Catholic Monarchs, but after the reconquest of Granada in 1492, Ferdinand and Isabella decided they’d rather be buried in the city of Granada. (Stay tuned — I’ll have more to say about that in a future post.)

We also paid a visit to the Iglesia de Santo Tomé, the church where the Burial of the Count of Orgaz by El Greco is displayed, and then continued on to El Museo del Greco (a museum dedicated to the artist). El Greco spent half of his life in Toledo, hence the museum. If you’re a fan of his work, I recommend you pay the city a visit.

For some reason I don’t seem to have any photos from our visit to the Synagogue of Santa María la Blanca, but I do have this photo of a street tile marking the Jewish Quarter of Toledo.

Throughout the Middle Ages, Jews, Christians, and Muslims peacefully co-existed on the Iberian Peninsula. In many ways, Spain is a living memorial to how three cultures intermingled and influenced each other (see the Mudéjar-decorated ceiling up above). It is also why Toledo is known as the Ciudad de las Tres Culturas (City of Three Cultures). But that all ended with the expulsion of the Jews by the Catholic Monarchs in 1492.

Santa María la Blanca is impressive, for sure, but also unique in that it is a Jewish house of worship built by Islamic architects in a kingdom ruled by Catholics. (The synagogue was later converted to a church, which is why it bears the name Santa María.)

When we were worn out from sightseeing, my sister and I spent a lot of time people-watching in the centrally located Plaza de Zocodover or Plaza del Ayuntamiento in front of the Cathedral. And, um, enjoying the culinary delights that Toledo had to offer. Again, stay tuned. I will have more to say on that topic in another post.

For now, know that after only two days in central Spain, I realized my sister was right.

I did love it. 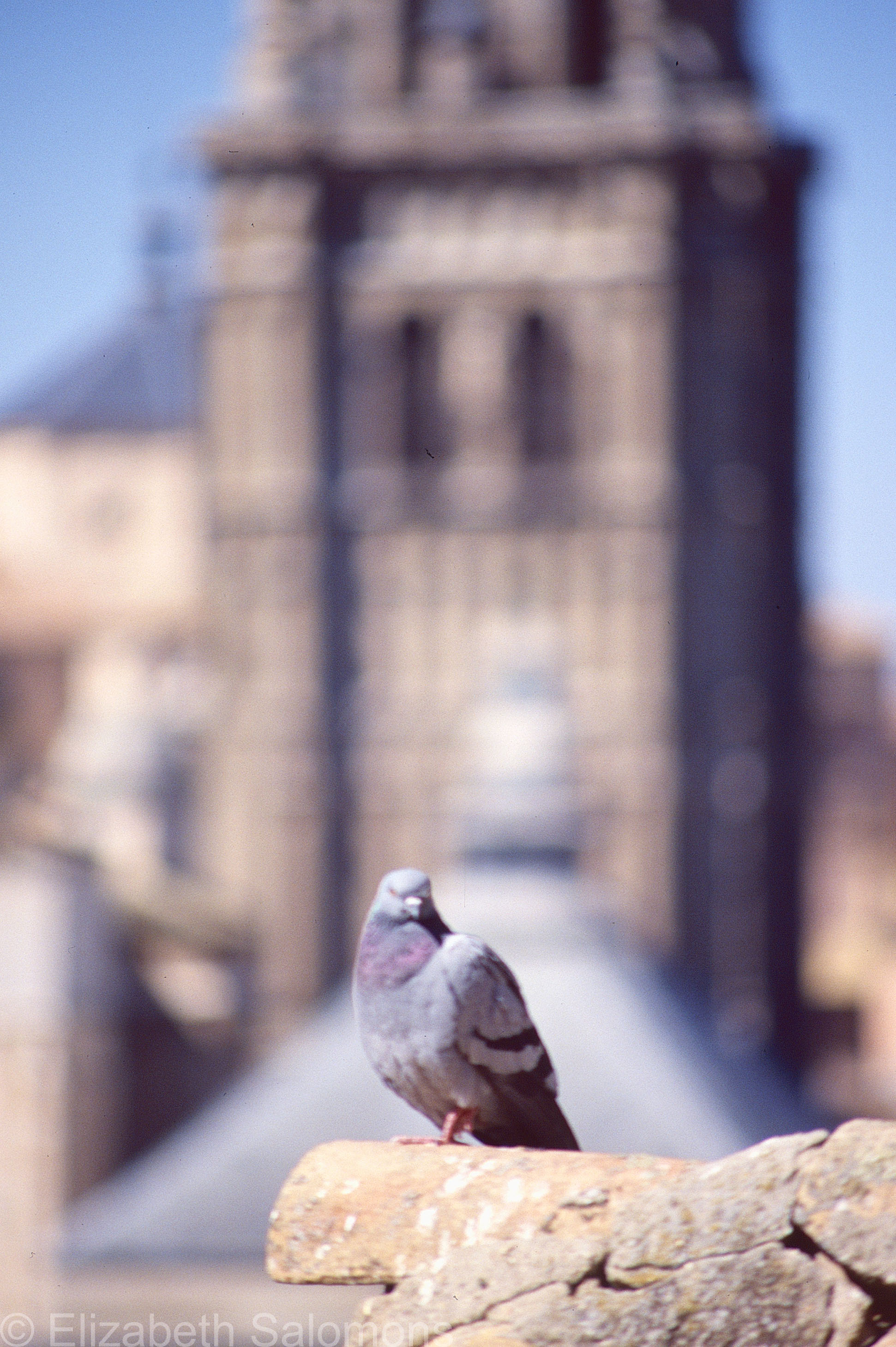