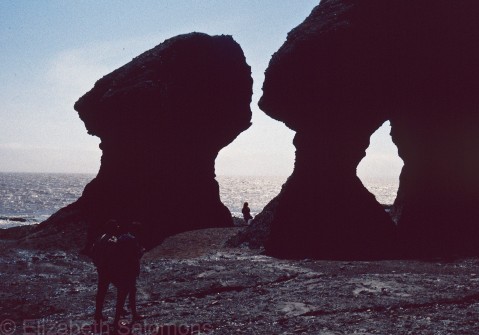 I’m nearing the end of my Canada 150 series, but it’s only now that I’ve reached leg two of my cross-Canada road trip. (Remember, I’m the one who doesn’t think it’s cheating if you break a cross-Canada road trip down into manageable chunks. Leg one of my road trip was from Vancouver to Toronto; a few years later I did Toronto to Cape Breton (that would be leg two); and a year after that was leg three, when I drove from Edmonton to Inuvik.)

On the way from Toronto to Cape Breton, we stopped off at Hopewell Rocks. These sea stacks are on the New Brunswick side of the Bay of Fundy. The Bay of Fundy is known for its tidal ranges, which are the highest anywhere in the world — sometimes as much as 16 metres or the height of a four-storey building. Those powerful tides have eroded the soft sandstone along the shoreline of the bay and created these rock formations.

We didn’t stick around long enough to watch the tide to come in, but if we had, we would have seen how only the tops of these rocks are visible at high tide.