Through My Lens: Prague Christmas Angel 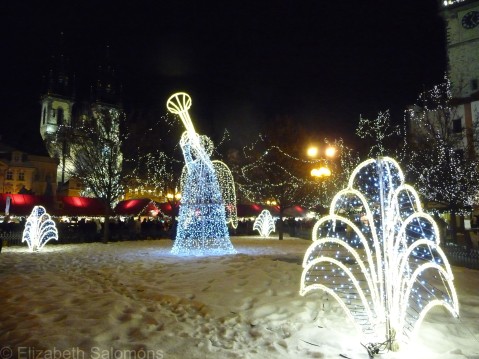 Of course, the bonus about getting to spend the winter in Paris are mini-breaks on the European continent.

Which I experienced one December weekend five years ago when I easyJetted off to Prague for the weekend.

Which is when I took this photo. 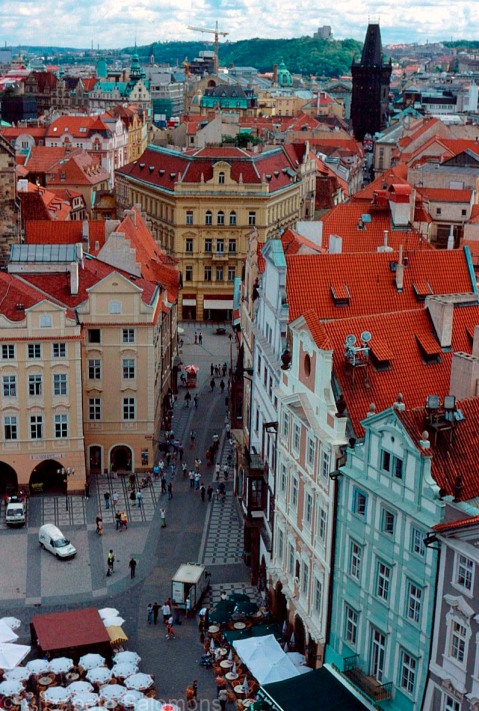 When I first visited Prague, I thought to myself, “This city is like a mini-Vienna!”

I don’t think I’m too far off. After all, the two cities are only a few hours apart. They also share a long history.

Well, for starters, both cities were part of the Holy Roman Empire and both were later ruled by the Hapsburgs. That went on for a century or three. When the Austrian Empire was created in 1804, it absorbed the Kingdom of Bohemia ― that’s the half of the Czech Republic where Prague sits today. And then in 1867, when the Austrians and the Hungarians decided to get together and form the Austro-Hungarian Empire, Bohemia was made one of its provinces and remained so until 1918.

I first visited Prague in the summer of 1998. I quickly realized it was a city of deep contrasts that was working hard to recover from all those centuries of domination by each of its neighbours in turn: the Hapsburgs and the Austrians I’ve already mentioned, and the Nazis, and, oh yeah, those Russians.

That same summer, I heard an American-Jew who had lived in both Prague and Vienna say that the Czech nation has always been western, and it was dragged kicking and screaming into the East in both 1948 (when the Communists took power) and 1968 (when the Russian tanks rolled into town).

From what I saw, Prague ― a definitively western city that bears a striking resemblance to Vienna ― had bounced back into the West with lightning speed. Less than a decade after the fall of communism, designer shops and McDonalds dominated the streets and a flurry of tourists from all over Europe filled the Old Town Square daily.

Prague has a long and storied history simply because of geography: it sits at the crossroads of Europe. I find that fascinating.

But even more fascinating is a city full of life and colour and music that is (at long last) relishing its independence.

Through My Lens: Malá Strana

And now for something completely different. Just because.

I was at the Vancouver Opera again last weekend, enjoying a superb performance of Mozart’s Don Giovanni. This opera premiered a couple of centuries ago at the Estates Theatre in Prague, a city that loved Mozart and that Mozart loved in return. He was treated like a rock star whenever he came to town. Don Giovanni was commissioned by an Italian living in Prague when he saw how popular Mozart was in that city.

The Estates Theatre also happens to be where I first saw Don Giovanni. In fact, seeing Don Giovanni at the Estates Theatre in Prague was my first ever live opera experience. My friend and I treated ourselves to box seats because they set us back a mere $20 ― it was quite the introduction to live opera. If you enjoy music and you happen to be in Prague, I highly recommend checking it out.

I don’t have any photos of the Estates Theatre, but if you were to walk down the street in the photo below, the theatre would come into view just as you round the corner. Can’t you picture this street on a clear, crisp October night in 1787, with gown and cape–clad Praguers arriving at the Estates Theatre in their horse-drawn carriages? Then, with a little imagination, picture them sweeping en masse into the newly built theatre to witness a grand spectacle: the newest (some say best) opera from Wolfgang Amadeus Mozart, directed by the Maestro himself.

This is on the Charles Bridge in Prague. That’s the Castle he’s pointing to. 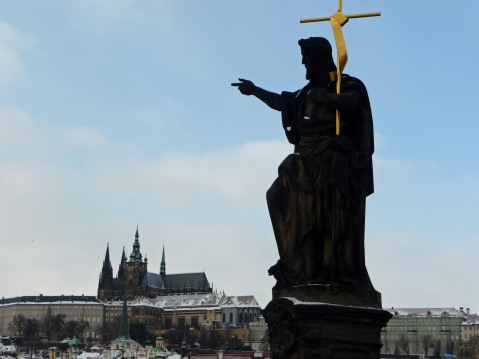 Through My Lens: Prague in Winter

Many summers ago, I spent four weeks in Prague. Some years later, I came across a photo of the Charles Bridge and the Castle covered with a fresh blanket of snow. I don’t know if it’s because I’m Canadian, but I immediately said to myself, “Someday, I’m going back to Prague and I’m going in the wintertime. I want to see it with snow.” I finally got my chance last winter.

I took this photo on my first morning. It was snowing lightly. I felt like I had walked into a fairy tale.

On a July afternoon in 1998, I was standing with a crowd of tourists beneath the Astronomical Clock of the Old Town Hall in the Old Town Square of Prague. I was in Prague as a student, enrolled in a fiction-writing course of the Prague Summer Seminars — a program then sponsored by the University of New Orleans in conjunction with Charles University.

Crowds of tourists standing beneath the Astronomical Clock were nothing new to me — every hour, on the hour, they stood there, waiting for the clock to chime. But this crowd seemed larger than usual and I was curious.

I lucked out. A few minutes later, a motorcade of burgundy Mercedes sedans pulled up, dignitary flags flapping. Out of the first car hopped President Václav Havel, the playwright who was then running the country, on his way into the Old Town Hall. As quickly as he had arrived, he disappeared, and the crowd began to disperse.

The following weekend, my roommate and I bumped into my writing teacher, Arnošt Lustig, as we walked out of the Castle. A spry septuagenarian, he held out his arms in greeting as he climbed the steep steps. I grinned broadly at catching him off-duty. My friend asked Arnošt whether he was also sight-seeing, but he exclaimed, “I live here!” and he pointed at the Castle. He had told us so in class, but we didn’t quite believe him for he was quite a story-teller.

When I asked Arnošt for details the next day, as we drank our coffee and ate our palaçinka on our mid-class break, he told me how he had helped out Václav Havel years earlier when the Communists were after him. In return, Arnošt stayed at the Castle, as Havel’s guest, any time Arnošt was in Prague. What a beautiful friendship, I thought, and I never doubted Arnošt’s stories again. 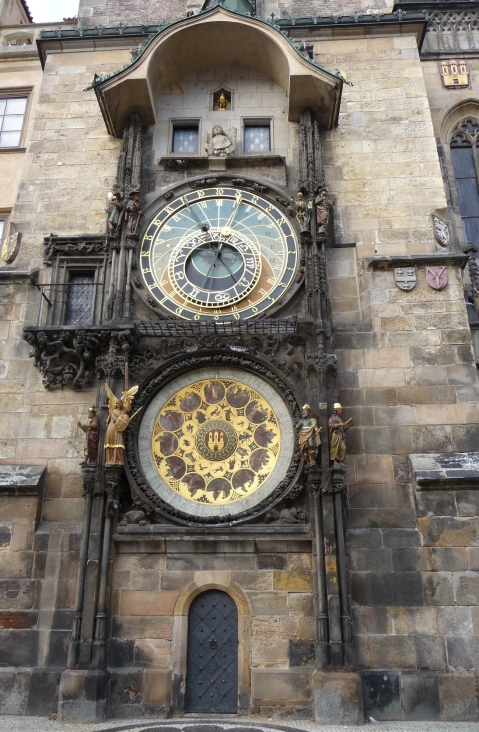