Through My Lens: Seattle Central Library

Here’s a photo of the funky escalators at the Seattle Central Library. I’ve been wanting to post more photos of this library ever since I photographed it when I was last in Seattle. I have three good reasons for posting one today.

And so, a photo of a library is entirely appropriate for today. Enjoy.

This week is Freedom to Read Week in Canada, so I thought it was high time I wrote another post about a book. Or, perhaps, many thousands of books. Like the ones in this library. 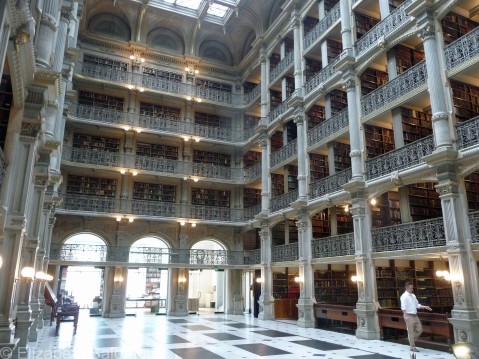 There are libraries. And then … well … and then there’s the George Peabody Library.

The George Peabody Library is one of the libraries of Johns Hopkins University in Baltimore, Maryland. It’s housed in a stunning building designed by architect Edmund Lind and has been open to the public since 1873. The library is named after George Peabody, the American–British financier and philanthropist who provided the funds for the library’s founding in 1857.

The collection consists of over 300,000 books, mostly from the eighteenth and nineteenth centuries, and specializes in all the good stuff: archaeology, British art and architecture, British and American history, English and American literature, Romance languages and literature, Greek and Latin classics, history of science, geography, and ― wait for it ― exploration and travel.

There are a lot of cool-looking libraries on this planet. As if I need another reason to travel, I plan to photograph as many of them as I can.