Happy Birthday to The Sound of Music!

Fifty years ago last month, The Sound of Music had its cinematic release ― and “How Do You Solve a Problem Like Maria?” has been an earworm plaguing moviegoers ever since. I’ve lost count of how many times I’ve watched the film, but I have strong memories about a handful of viewings.

My dad promised me I would love it.

Of course, I became an instant fan, besotted, as most kids are, by all those children in funny clothes and by all those catchy tunes.

Another memorable viewing of The Sound of Music was just last fall, when I had the privilege of introducing the film to my then three-year-old niece. She was captivated (if a bit confused) by the sight and sound of Mary Poppins singing “Do-Re-Mi” and her response when the last “So-Do” sounded was instantaneous.

“Again!” she commanded from her perch on my couch. I dutifully obeyed and rewound the film to the start of the song. When it was finished, she again called out, “again!”

You get the picture.

It took my sister, who arrived halfway through the movie, to do what I wasn’t able to ― convince my niece to continue watching past “Do-Re-Mi.” (Note that, being responsible aunts, we turned the TV off after the wedding scene and told her that was the end of the movie ― no need to traumatize a young child with scenes of goose-stepping Nazis.)

“The Lonely Goatherd” and “So Long, Farewell” proved to be big hits as well and that afternoon made me realize how timeless The Sound of Music is. My niece was just as enthralled with the film as I had been all those decades earlier.

My most recent viewing of The Sound of Music was a couple of weeks ago when I saw it for the first time ever on the big screen. I was shocked at the packed movie theatre ― as full as if the film were a new release ― and at how compelling I found the nearly three-hour film ― as if I were watching it for the first time. The entire audience burst into applause at the end.

But my most memorable viewing was in the city of Salzburg, where much of The Sound of Music was filmed. My friend and I were backpacking around Europe, making all the usual stops ― including Salzburg ― and doing all the usual touristy things ― including the obligatory “Sound of Music” tour of the filming locations. After the tour, we were dropped off at the youth hostel that hosted a daily screening of the film and we watched and laughed along with the rest of our tour group when all of the Salzburg locations we had just visited showed up on screen.

I live in Vancouver (aka Hollywood North) and am used to seeing my town turned upside down by film crews. For the past two weeks, one of the main routes out of the downtown core was closed to vehicle traffic during business hours to allow for the shooting of a scene from Ryan Reynold’s next action flick. Vancouverites put up with this kind of nonsense because we know how lucrative a successful film industry can be.

I suspect that the residents of Salzburg are just as OK with the tourist dollars that The Sound of Music has brought them. But my best guess is that none of them had any idea that the film would turn out to be one most commercially successful motion pictures of all time ― or that the hoards of pop-culture tourists such as myself would still be beating a path to their door some 50 years later. 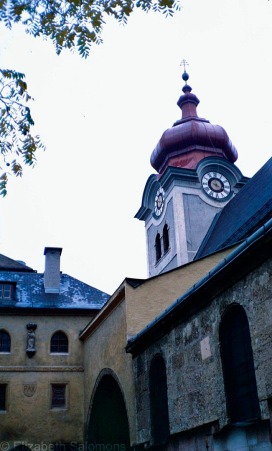 The Nonnberg Abbey where Maria was a postulant.

Leopoldskron Palace was used to film the exteriors of the home of the von Trapp family.

The gazebo now stands on the grounds of Hellbrunn Palace.

Mirabell Gardens, where Maria and the children sing “Do-Re-Mi.”

Mondsee Abbey was used to film the wedding of Maria and Baron von Trapp. 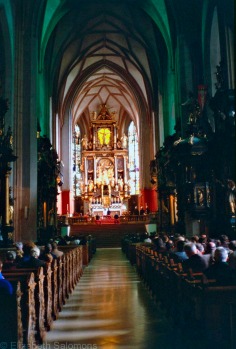 When our tour group took a peak inside the church of Mondsee Abbey, we discovered there was a wedding in progress.
Join 267 other subscribers