When I have fears that I may cease to be
Before my pen has gleaned my teeming brain,
Before high-piled books, in charactery,
Hold like rich garners the full ripened grain;
When I behold, upon the night’s starred face,
Huge cloudy symbols of a high romance,
And think that I may never live to trace
Their shadows with the magic hand of chance;
And when I feel, fair creature of an hour,
That I shall never look upon thee more,
Never have relish in the faery power
Of unreflecting love; — then on the shore
Of the wide world I stand alone, and think
Till love and fame to nothingness do sink.
— John Keats

Back when I was a child (no, really — I was still in my teens), I took a course on the English Romantic poets. The first semester was all about William Blake and the Lake Poets (Coleridge and Wordsworth, among others). The poets known as the Late Romantics— Byron, Shelley, and Keats — took up the second semester.

It was a challenging course; in her feedback to a paper I wrote on Keats, my professor gently suggested I was perhaps more inclined towards studying history than literature. (She was right.)

But those young poets never left me, in their way, and so, less than a year later, I found myself wandering through a Roman cemetery looking for John Keats’ headstone. He died of consumption — what we now know as tuberculosis — on February 23, 1821. Like so many ex-pats in Rome, he was buried in the Protestant Cemetery. Unlike most people, he insisted his headstone not bear his name, but rather “Here lies One Whose Name was writ in Water.”

On that same visit to Rome, I also visited the Keats–Shelley Memorial House beside the Spanish Steps. It’s the house on the far right in the next photo. It was sobering to see where Keats died, but also thrilling to see the incarnation of my entire Romantic poetry course in three rooms. 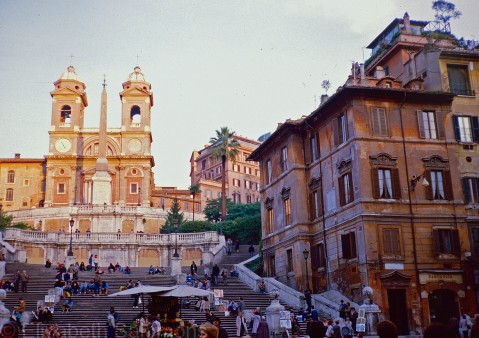 I stopped by the Keats House in Hampstead, in the north part of London, on my next trip overseas. Hampstead Heath, a marvelous open space of almost 800 acres that beckons when you are museumed out, lies just behind the house.

Since I keep bumping into Keats on my travels, I thought it only right that I acknowledge the 200th anniversary of his death.

But back to the Romantic poetry course that started it all for me. One morning, my prof began class by asking who among us had life insurance. Her point was how unusual it was for someone as young as Keats to be so aware of his own mortality.

Unusual, but understandable. Keats lost both parents before he was grown and then watched his younger brother die of tuberculosis. He had also trained as a doctor. By his early twenties, Keats had seen far more death and dying than most of us will see in a lifetime. His sense of how fleeting life is inspired him to write poems like the sonnet I started this post with, which he wrote a month after his brother died.

More death and dying than most of us will see in a lifetime — that, of course, refers to those of us who will live through this pandemic more or less unscathed. And those of us who do, have far more privilege than most.

Through My Lens: Roman Jar 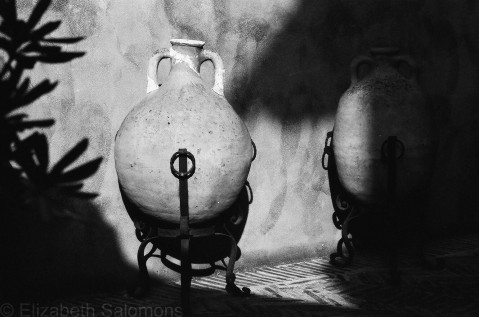 I’m yearning for La Dolce Vita this weekend―but I know it will be some years before I’ll have a chance to quench that yearning.

In the meantime, I thought I would share with you one of my favourite photos. I took this at the Castel Sant’Angelo in Rome.

Through My Lens: Golden Hour at the Palatine

I took this photo from the Palatine Hill, the centremost of Ancient Rome’s seven hills. It overlooks the Forum and is the oldest part of Rome.

My friends and I explored the Palatine ruins at the end of a full day of sight-seeing. The Golden Hour arrived just as we did, and the soft light gave the place a magic quality.

There are hundreds of wondrous and beautiful churches in the Eternal City, some of which have left me speechless and some of which have moved me to tears. But, to my mind, the Palatine is the most sacred and holy space in all of Rome. 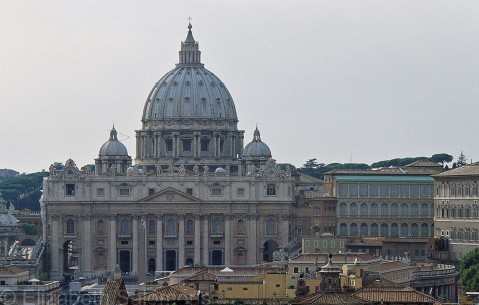 Through My Lens: The Pantheon

Today is Palm Sunday, and we’re moving on to Rome. Rome is also known as the Eternal City ― the ancient Romans called it that because they thought the Roman Empire would go on forever. (Look how that turned out.)

One of my favourite Roman churches is this one, the Pantheon. I like it simply because it is so ancient ― almost 2000 years old.

For more on the Pantheon, check out the photo I posted a couple of years ago.

Vancouver Opera has just finished its run of Puccini’s Tosca for which it received rave reviews. I got to see it on opening night and enjoyed it immensely. I’ve been looking forward to hearing this particular opera for many years ― and not only because I have yet to meet a Puccini opera I didn’t love.

No, I’ve been wanting to hear Tosca ever since the friend who introduced me to opera told me how, at the end of the opera, Tosca jumps to her death from the ramparts of Castel Sant’Angelo. Why did this make such an impact on me? Because my friend told me the story of Tosca’s demise when we were standing on the ramparts of Castel Sant’Angelo. (There’s nothing like context to make opera come alive!)

If you’re wondering how high those ramparts might be, here’s a photo of the Tiber that I took when I turned around after taking the above photo. 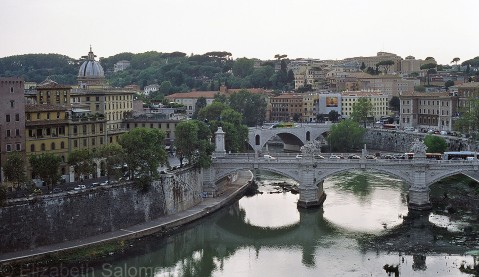 Another interesting detail about Tosca: Act I is set in the Church of Sant’Andrea della Valle. My friends and I discovered this bit of trivia when we wandered into the church, which just happened to be located on the same street as our Roman hotel. Lesson learned: you never know what awaits you inside a Roman church.

All eyes will be on Rome tomorrow as the 75th papal conclave begins. Papal conclaves have been conducted to elect popes after it took two years, nine months, and two days to elect a successor to Pope Clement IV in the thirteenth century. To avoid a repeat of that nonsense, Pope Clement IV’s successor, Pope Gregory X, decreed that all future papal elections would take place with the voting cardinals locked in a room until they came to a decision. Cum clave (conclave) is Latin for “with a key.” And so began the papal conclaves that, for the most part, have been used to elect new popes ever since.

I think posting a photo of St. Peter’s Basilica (aka Basilica Papale di San Pietro in Vaticano) is appropriate, given the occasion. By the time I wake up tomorrow, the 115 cardinals will be getting ready to process into the Sistine Chapel. The first puffs of smoke should follow a few hours later. The conclave that elected Pope Benedict XVI in 2005 took less than 24 hours.

I don’t suppose there is anyone on the planet who hasn’t fallen a little in love with either Audrey Hepburn or Gregory Peck in Roman Holiday.

But … just in case … I thought I’d mention this lovely 1953 romantic comedy.

Roman Holiday was filmed entirely on location in Rome — a novelty at a time when most films were shot on studio lots in Hollywood. One of the most memorable scenes takes place at the Mouth of Truth. According to legend, if you told a lie with your hand in the mouth, it would be bitten off. While filming this scene, Gregory Peck decided to pull his hand up inside his sleeve as he was pulling it out of the mouth. Audrey Hepburn’s screams were the real deal, he said in interviews many years later, as she had no idea he would play such a trick on her.

The next time you’re in Rome, you can test the legend for yourself. The Mouth of Truth is located in the front portico of the Basilica di Santa Maria in Cosmedin, a small church next to the Tiber. There’s always a long line of tourists waiting to have their photo taken with their hand in the mouth — a credit to the enduring popularity of Roman Holiday.

Me: I’ve been there, done that. My next goal is to find myself a Roman apartment to rent, identical to that of Gregory Peck’s character, Joe Bradley. Something tells me I’ll be searching for a very long time.

On one of my trips to Rome, I arrived 24 hours before my friends so I could have a day to wander around on my own. First thing that first morning, I set out from my hotel, eager and excited to begin exploring. Within minutes, I stumbled around a corner into Piazza della Rotunda and found myself staring up at the Pantheon in complete awe.

At that moment, it hit me with a massive thump. I was in Rome. And Rome is really, really old.

I’ve done a fair bit of wandering around Europe, in countries like England, France, and the Netherlands, and I am always struck by the amount of history. Compared to Canada, there is an awful lot of it in Europe.

But Rome! I know I’m stating the obvious, but Rome is in a category all its own. It’s not just old ― it’s ancient.

The Pantheon was built by Marcus Agrippa in 27 BC as a temple to all the gods of Rome, was rebuilt by Emperor Hadrian about 150 years later, and has been used as a church since the seventh century. It’s awesome inside ― a perfect circle ― and contains the tombs of Victor Emmanuel II, first king of a united Italy, and Raphael, Renaissance artist, among many others. The only daylight to enter the structure is from the oculus at the top of the dome.

The inscription on the pediment reads “M. AGRIPPA. L. F. COS. TERTIUM. FECIT.” Later that same visit, one of my friends, a linguist, translated the Latin for us: “M Agrippa, son of Lucius, consul for the third time, built this.” She burst into laughter when she reached “built this.” Agrippa, mighty Roman general, was no different than the child who writes their name on the schoolwork they take home to Mom or Dad.

Now, every time I return to Rome, the first thing I do is revisit the Pantheon to remind myself of where I am and how awesome a place it is. I don’t ever want to lose that feeling.

My sister is getting married this month, and she and her soon-to-be husband are planning a honeymoon to Italy later this summer. I figure that’s as good a reason as any to focus this month’s posts on Italy. (As if I need an excuse to write about Italy.)

For my first post: a photo of what I consider to be the essence of la dolce vita (the sweet life): a piazza, a glass of vino, and an Italian waiter to serve you. I took this in Piazza della Rotonda on our last day in Rome, October 2007. 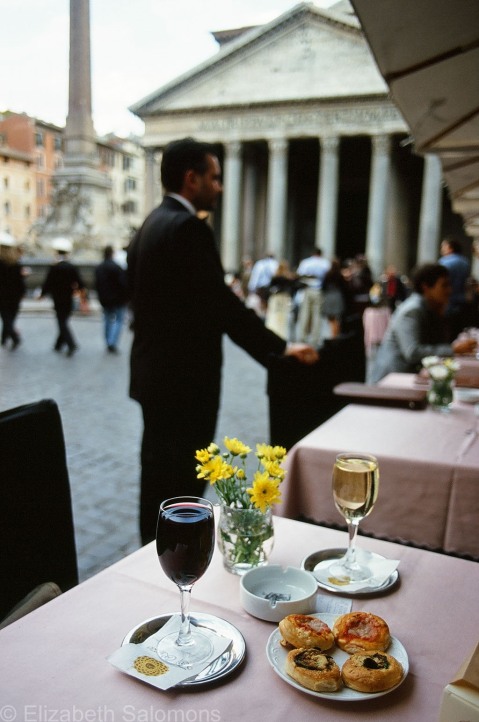