Lakes in the Clouds 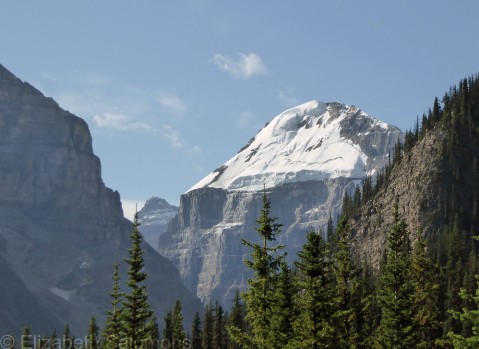 As has been the case for so many of us, one of the outcomes of this pandemic was me having to adjust my travel plans for 2020. Obviously, postponing a holiday is about as far down on the scale of hardships as you can go during this crazy year, so I really don’t want to give the impression that I am complaining.

But it did mean that the one year I finally decided to spend a longer chunk of time visiting my extended family in Alberta did not happen. Hanging out with at-risk relatives or family who need to be extra cautious because they work in health care would not have been smart.

But the long drive was worth it. Seriously. The scenery between Vancouver and Red Deer is so varied; I personally think it rates up there as one of the most scenic road trips on the planet.

And on my way home, I also had one glorious day in Banff.

Who knew Banff was at its best in the fall? If I could guarantee great weather every year, I’d take all my mountain vacations in September.

Since I had only the one day, I planned it carefully. The 7 km hike up to Lake Agnes Teahouse is maximum bang for minimal effort and is a hike I used to do as a kid with my family when we spent our summers camping in the Rockies.

Plus, the trailhead is at Lake Louise, easily one of the most photographed lakes in all of Canada.

The hike up to Lake Agnes starts off with a long steady climb through the forest above Lake Louise, with a couple of spectacular peek-a-boo views of the lake far below. Then comes a series of switchbacks until you reach Mirror Lake. Looming over it is the Beehive. 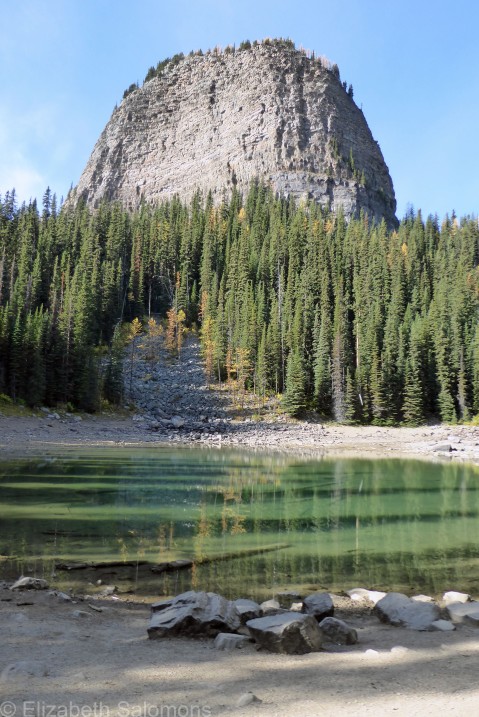 While stopping to catch my breath, I ducked as a Clark’s Nutcracker skimmed by just inches above my head and took its perch on a tree branch nearby. Only a second later, I overhead a father and son near me lamenting the lack of wildlife.

A kilometre past Mirror Lake is Lake Agnes and its famous teahouse. The lake was named after Lady Agnes MacDonald, wife of Canada’s first prime minister, who visited the lake in 1886. The tea house has been in operation since 1905.

By this point, I’d climbed 400 metres and was pretty much done, but those who have energy to burn can climb the Beehive for a bird’s eye view of all three lakes — Lake Agnes, Mirror Lake, and Lake Louise — that make up the Lakes in the Clouds.

As I drove away from Banff National Park the next morning, the clouds were rolling in and the rain was starting to fall. I had timed my one-day vacation perfectly. And as far as following the directions of my provincial health officer (“fewer faces, bigger spaces”), I had done all right by that too.

My Canada 150 series would not be complete without a post about Canada’s oldest national park. But since every single one of my previous posts on Banff consists of a photo of a mountain, I’d thought I’d mix it up this time. (Otherwise you might get the idea that the only thing to see in Banff National Park are mountains.)

Of course, say “wildlife” and “Banff” in the same sentence and most people will start listing off which of the Big Five — deer, elk, moose, bear, and wolf — they’ve seen. The big animals do deserve the attention they get, but it is often the little animals, which are far easier to get up close and personal with, that lead to the best photo ops.

We Albertans call these gophers. They live in underground burrows and spend much of the year hibernating. As far as rodents go, they’re kinda big — typically about a foot in length.

I took this photo last summer.

Through My Lens: Cascade Mountain From Johnson Lake 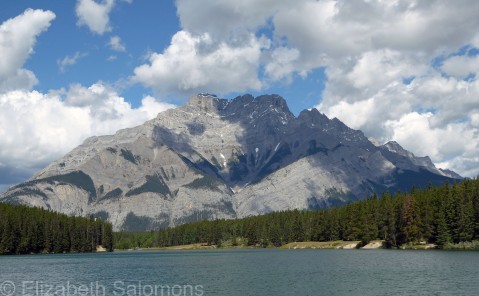 Here’s another mountain. Just because.

This one is called Cascade Mountain. It’s the largest mountain abutting the townsite of Banff. I took this photo from Johnson Lake as well.

Through My Lens: Mount Rundle From Johnson Lake 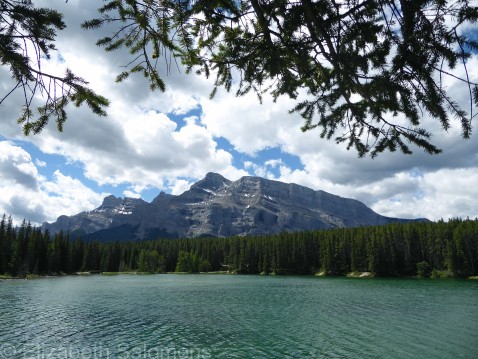 I posted my postcard shot of Mount Rundle last summer. That’s the view most people see of Mount Rundle as they drive past it when travelling along the Trans-Canada Highway.

This view ― not the postcard shot ― was taken from the other side of the mountain. The lake is Johnson Lake.

Through My Lens: Top of Sulphur Mountain

This view is from the top of Sulphur Mountain in Banff National Park. Take a deep breath: those are the Rocky Mountains you’re looking at.

There are two ways to get to the top of Sulphur Mountain: you can hike up or you can ride up. The hike up isn’t a long one (5.5 km), but it is all uphill (elevation gain of 650 m). The Banff Gondola is a lot easier and a lot quicker. It runs year round and takes you from the Banff Upper Hot Springs to the top of the mountain in just eight minutes. (Those hot springs, incidentally, are how Sulphur Mountain got its name.)

Once you’re at the top of Sulphur Mountain, you have a 360-degree view of the Rocky Mountains.

Through My Lens: Boom Lake

Wait? How did that happen?

It’s closing in on the end of September and I am way behind on posting about last month’s road trip to Alberta and back. Waaaay behind.

It’s not like I don’t know what to write about. I may even have a photo or two to post as well.

Here’s one. This is Boom Lake in Banff National Park, which is accessible by an easy 5 km hike from Highway 93. That’s not fog ― it’s smoke from last month’s wildfires in Washington state.

Here’s the thing I discovered about Banff National Park during my visit last month.

I don’t mean it’s super crowded and chock-full of tourists. I mean there is, quite simply, no more room. Every campsite is filled, every hotel room is booked, and the streets of Banff townsite are gridlock by noon, as are the access roads to Lake Louise and Moraine Lake.

So what solution to the madness does someone who has just driven from Vancouver to Banff suggest to her family?

That they head across the Alberta–BC border to Yoho National Park.

Yoho was created a national park in 1886, just a year after Banff. It’s slightly over 500 square miles, about a fifth of the size of Banff, but it packs just as much awe and wonder ― in fact, its name, Yoho, is a Cree expression of wonder.

Just like in Banff, there is a wide assortment of hiking to do in Yoho, both short day hikes and longer overnight hikes in the back country.

And, just like in Banff, there are photo ops. Gazillions of photo ops.

Here is one. This is Takakkaw Falls. Takakkaw is another Cree expression ― it means “it is magnificent.” (My brother and sisters and I had a lot of fun with the word “takakkaw” back in the last century when we were little kids.) 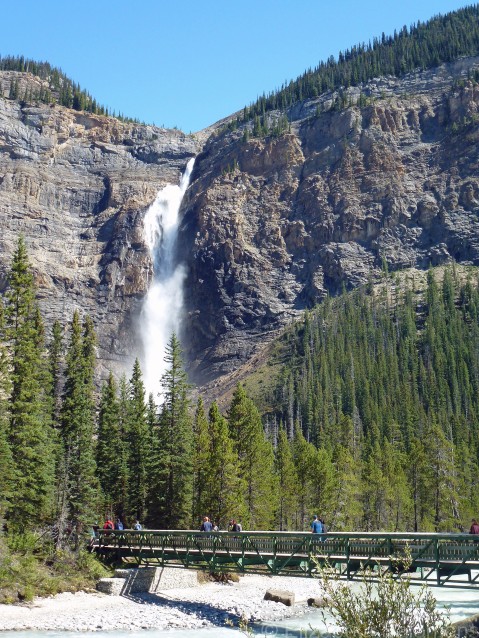 Here’s another. This is the Natural Bridge, which straddles the Kicking Horse River. I also remember coming here when I was little, and I remember how fascinated I was by the origin of the name “Kicking Horse River.” James Hector named it that after getting kicked by his pack horse. Hector was a member of the Palliser Expedition, a group of men surveying possible routes for the Canadian Pacific Railway. They reached the Kicking Horse River in 1858. 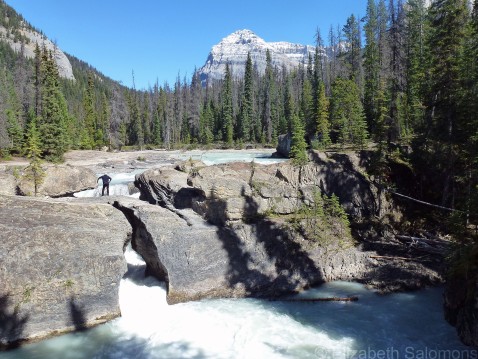 Here’s a look at the Natural Bridge from another angle. 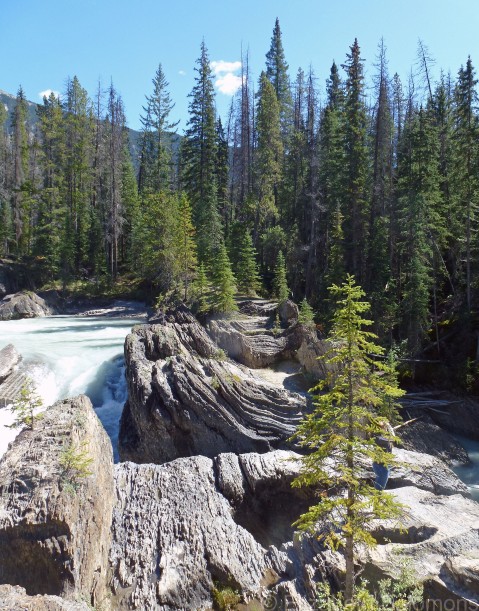 And here’s a closer look at the mighty Kicking Horse River. That’s Mount Stephen behind. 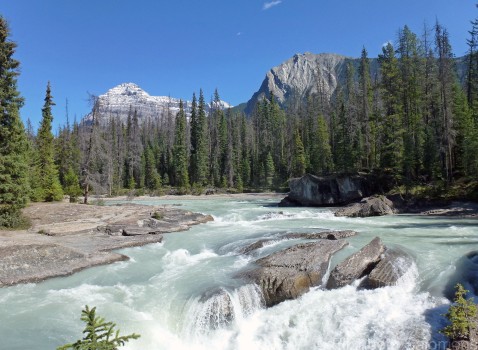 Just down the road from the Natural Bridge is what’s known as the Meeting of the Waters. It’s the confluence of the Yoho River (at left, in the photo below) and the Kicking Horse River (dead ahead). You only need to stand here for a second or two to be overwhelmed by the power of these two rivers.

Turn to the right, and you have this view.

So, here’s my tip of the summer: the next time you can’t get close to Lake Louise, get back on the Trans-Canada Highway and drive another twenty minutes west to Yoho National Park. You won’t regret it.

Through My Lens: Wapta Mountain 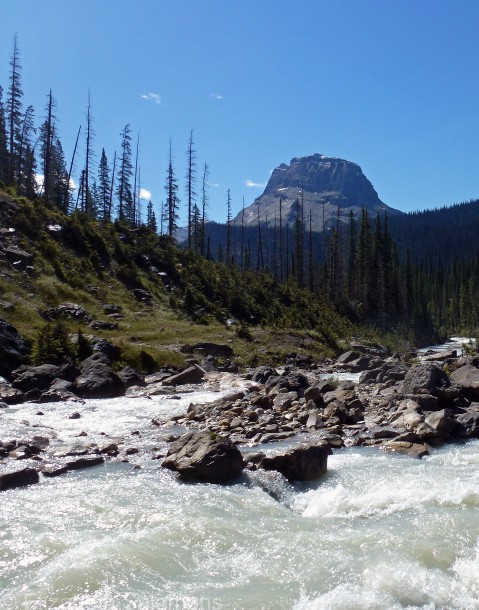 Another day, another Rocky Mountain. This one is Wapta Mountain, which I spent most of last weekend getting mixed up with Castle Mountain.

That torrent of water flowing past in front is the Yoho River.

Through My Lens: Castle Mountain

Here is another photo of a beautiful Rocky Mountain that I took last weekend. This one is of Castle Mountain, and I took it from a moving car along the Bow Valley Parkway.

And no, I was not doing the driving.

Through My Lens: Mount Rundle 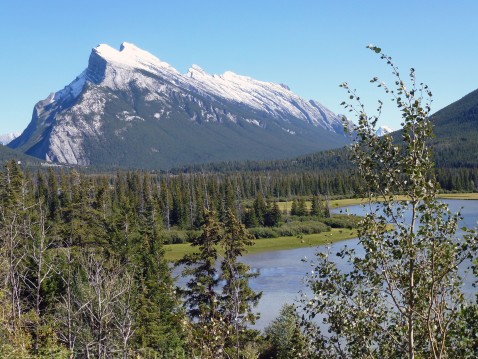 Regular readers of this blog know how beautiful I think Vancouver is and how blessed I feel that I get to live in one of the most beautiful cities in the world.

But there is something about Alberta that always takes my breath away. This photo shows why. I took this shot of Mount Rundle in Banff National Park last weekend.