Hanging Out in Solo

While my sister and her husband are busy eating, drinking, and loving their way around Italy, I’ve been on house-sitting duty. House sitting, I’m discovering, is an awful lot like home exchanging: it gives me a chance to enjoy the perks of someone else’s home for a while, and the opportunity to explore a new neighbourhood. The only difference between this round of house sitting and my previous home exchanges is that, if I need something from home, I can easily go get it.

The perks this time are pretty good. I have an enormous south-facing backyard all to myself, with a covered patio, a Rolls-Royce of barbecues, and an herb garden. Beyond that, there’s a back 40 filled with bushes dripping with almost-ripe blackberries. The herb garden has to be watered daily, as does a forest of small trees belonging to my brother-in-law. And then there are the six cats (two of them my own) who need to be fed and watered twice a day. I feel like I’m playing farmer, what with all these animals, crops, and chores, but hey, it’s summertime, and it’s pretty heavenly.

The neighbourhood, on the other hand? Not so heavenly. I’m in North Burnaby, in an area some developers are starting to call Solo ― that’s SOuth of LOugheed. (Go ahead, laugh. I did.) The subdivision where I am temporarily lodged is sandwiched between two highways: Lougheed (with the elevated SkyTrain running above it) and the Trans-Canada. That means I’m listening to the constant white noise of freeway traffic to the south, and the intermittent whirr of the SkyTrain to the north.

North Burnaby is not that attractive, in other words. It’s one mall after another, one industrial park after another, one arterial road after another. I loathe the whole car culture that is necessary here; I know it’s no different from any other North American suburb, but it’s what I hate most about suburbia and why I choose to live downtown. The other day I used a drive-through ATM for the first time in my life, and felt strangely defeated by doing so.

However, spend enough time in a neighbourhood and eventually, somewhere, somehow, you begin to discover its treasures. Burnaby has a few that are simply delightful, which I’ll write about in another post. For now, I will remind you (my faithful readers) and myself that the intent of this blog is to take a second look at our surroundings ― whether beautiful or mundane. And I’ll leave you with a photo of some marvellous engineering. After all, there is beauty in that, too, right? 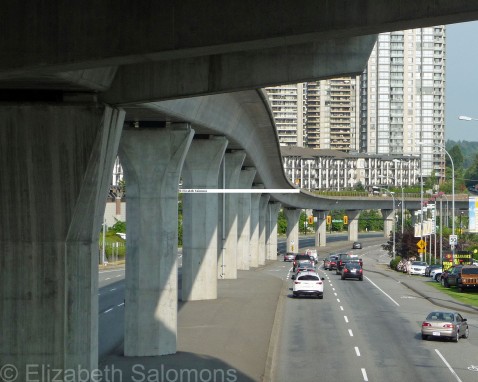