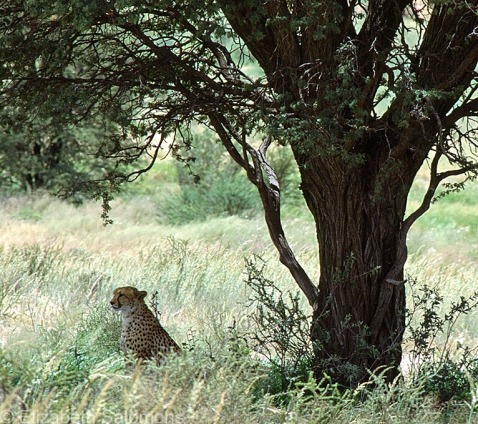 This is a cheetah. It’s not the best of photos, but I thought I should include it in my Kalahari series because apparently I was pretty lucky to see a cheetah on my first ever safari. We came across this one on our fifth day out, and my German safari companion was ecstatic. It was the first cheetah she’d seen in all her years of going on safari.

There were actually two cheetahs under this tree, but one lay down in the grass just as we spotted them, so it’s not visible in the photo. (Which made me wonder, then: exactly how many animals had we not seen over the previous four days because of the tall grass?)

Two bits of trivia about the cheetah: its coat is covered with nearly 2000 black spots. And it can sprint at a speed of 100 kilometres an hour, making it the fastest mammal on land.