I’ve written before about my summer in Quebec City — and how six weeks is a nice chunk of time to get to know a place. Even so, I was surprised last year during my visit to Vieux-Québec at how familiar the place was.

Still. After all these years. 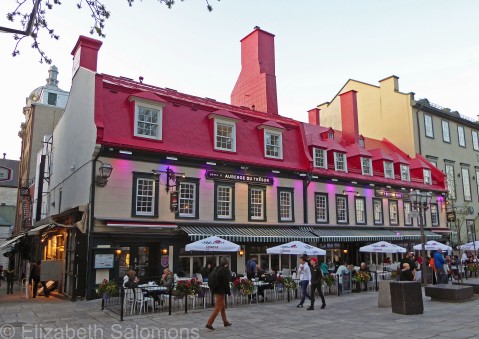 I arrived from Montreal by train around midday, and the funny little man at my budget hotel offered to outline a nice walking tour for me on his map.

“Non, merci!” I said, smiling. I knew exactly where I wanted to go.

He looked up from his map, a little surprised and, I think, a little insulted. But he shrugged, handed me the map, and off I went. 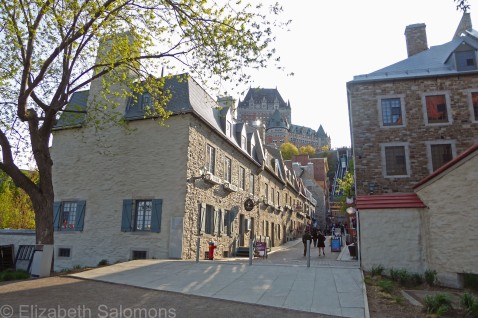 Encircled by its original ramparts, Vieux-Québec (Old Quebec) is divided into an Upper Town and a Lower Town. I chose to stay in the Lower Town, just a few steps from the train station to make my arrival more convenient for me, but it turned out to be a serendipitous choice. 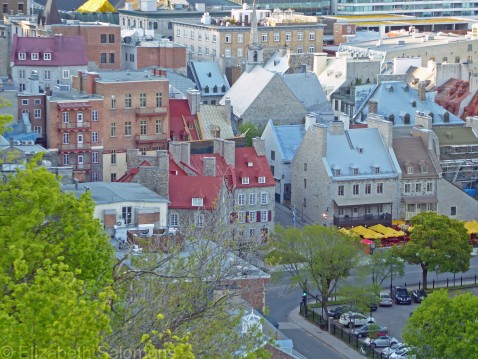 I was close enough to the action, so to speak, but far enough away that I had some enjoyable late evening walks back to my hotel through quiet streets. 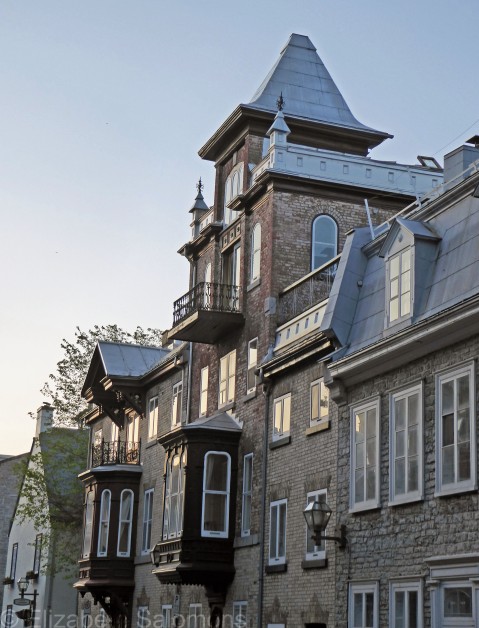 The name “Quebec” comes from an Indigenous word meaning “where the river narrows.” That narrowing river is the mighty Saint Lawrence. 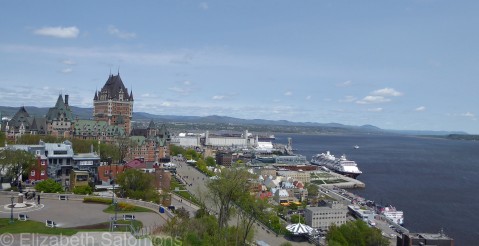 The first permanent European settlement at Quebec City was established in 1608 by Samuel de Champlain. Le Petit Champlain, the oldest quarter of Vieux-Québec, is named for him, and Rue du Petit-Champlain (shown in this next photo) is its main drag.

Vieux-Québec is filled with stone buildings dating back to the seventeenth century, with their characteristic French-style roofs.

Notre-Dame-des-Victoires, in Place-Royale, is the oldest stone church in North America. It was built in 1688.

At the edge of the Upper Town, Dufferin Terrace lets you walk from the foot of the Citadelle to Chateau Frontenac, and provides a magnificent view over the Saint Lawrence River, the Lower Town, and, on a good day, the Laurentian Mountains.

A sign of the not insignificant role of the Catholic Church in Quebec’s history are the many church spires scattered throughout Vieux-Québec.

And then there’s this grand building, the Séminaire de Québec, which takes you by surprise when you round the corner. The seminary was founded in 1663, and this building declared a national historic site in 1929. 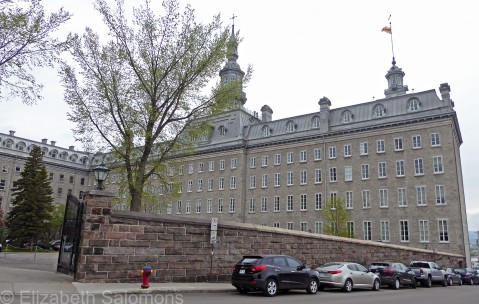 Vieux-Québec is the only walled city in Canada or the United States.

I wrote above about how familiar Vieux-Québec was for me, even after all these years. For my mother, not so much. I happened to be with her on her first time back in Quebec City, some 40 years after her arrival by immigrant ship. I remember watching her as she leaned over the railing that lines Dufferin Terrace, intently scanning the waterfront below us. I could see how much she wanted to recognize something … anything. 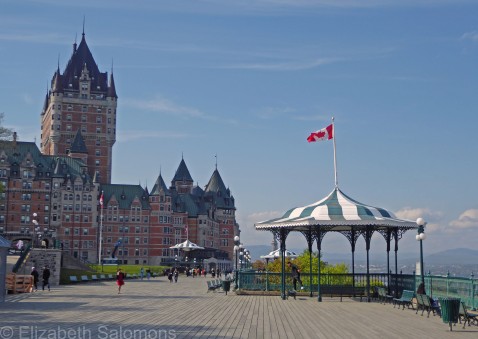 Finally she stepped back and shook her head. It was no good; nothing about the port looked familiar to her.

I doubt it was because she was too young to remember — a child’s memories can be quite vivid, and I suspect that her first impressions of a new country were imprinted on her mind. What it does speak to is that there are parts of Vieux-Québec that have changed over the years, after all, and a port that greeted new Canadians for more than 200 years looks quite different from the port that now greets tourists arriving by cruise ship.

Vieux-Québec was declared a World Heritage Site by UNESCO in 1985. It is indeed a special place and should really be visited by every Canadian.

Six weeks, if you can. But if that’s not possible, then a couple of days will do nicely.