I’ve had Vienna on my mind for much of the past few months ― and not only because I recently posted about Salzburg.

It all began with Frederic Morton’s A Nervous Splendor: Vienna, 1888–1889. The book was required reading for my Modern Europe history course a couple of decades ago, and I enjoyed it so much that I later bought Morton’s other book about Vienna: Thunder at Twilight: Vienna 1913–1914.

And then promptly packed both books in a box for one of my (many) moves.

This winter I finally got around to pulling both books off the shelf. I reread A Nervous Splendor and then, for the first time, I read Thunder at Twilight. (I’m about three-quarters of the way through the latter at the moment.) A Nervous Splendor tells the story of the last few months of Crown Prince Rudolph’s life and his suicide, while Thunder at Twilight tells the story of the last few months of Archduke Franz Ferdinand’s life and his murder. Both men were heirs to the Austrian-Hungarian throne until their untimely deaths. The suicide of Rudolph was the beginning of the end for the Austrian-Hungarian empire, and the assassination of Franz Ferdinand in Sarajevo on June 28, 1914 ― we all know what happened after that ― was the nail in the empire’s coffin.

Both non-fiction books read like novels, and both are useful if you want to learn something about the waning decades of nineteenth-century Vienna and the city’s role in the build-up to World War I.

(Coincidentally, I found out just a few days ago that Frederic Morton, an Austrian-American writer, died two weeks ago in Vienna.)

In addition to my Viennese reading, I recently enjoyed Vancouver Opera’s performance of Johann Strauss’s Die Fledermaus, which transported me to 1870s Vienna, if only for a few hours.

And a couple of weekends ago, I saw Woman in Gold, a Hollywood film that far surpassed my expectations, which tells the story of an Austrian-Jew who took the Austrian government to court to get back the paintings stolen from her family by the Nazis.

All of this adds up to an awful lot of Viennese armchair travel. And, except for my reading of the Morton books, all of it was unintentional.

But unintentional armchair travel is a good excuse for posting about Vienna.

Vienna was one of the cities I hit on my first European walkabout by Eurail. Initially I found it rather overwhelming; my travelling companion was ready to leave almost as soon as we arrived.

But there is a spectacular majesty to Vienna that I came to respect before we moved on a few days later and I now think the city is too often overlooked. The seventh largest city in the European Union, sandwiched between Bucharest and Budapest, it gets far less attention from tourists than London, Berlin, Madrid, Rome, and Paris (aka Europe’s Big Five).

At the heart of Vienna’s majesty is the Ringstrasse ― a 5 km ring of boulevards that forms a semicircle through the heart of Vienna. Emperor Franz Joseph I, father of the above-mentioned Crown Prince Rudolph and uncle of the above-mentioned Franz Ferdinand, was much influenced by Napoleon III’s demand that Paris be transformed by Baron Haussmann. In 1857, Franz Joseph ordered that Vienna’s decaying walls be torn down and replaced with a series of grand new buildings.

The Burgtheater was completed in 1888.

And so began one of the largest construction projects ever completed in Viennese history: neo-Gothic, Renaissance, Baroque, and Neoclassical buildings sprouted up along on the Ringstrasse over the next several decades. These include the Vienna State Opera, or Wiener Staatsoper (1869), the Votive Church, or Votivkirche (1879), the Palace of Justice (1881), the Austrian Parliament (1883), the Town Hall, or Rathaus (1883), the University of Vienna (1884), the Imperial Court Theatre, or Burgtheater (1888), and the twin museums of Natural History, or Naturhistorisches Museum (1889) and Fine Arts, or Kunsthistoriches Museum (1891). Only the imperial palace, the Hofburg, is older than the Ringstrasse.

I initially started writing this post about Vienna because of all the recent happy coincidences I described above, but while doing my research, I discovered another happy coincidence: it was 150 years ago today, in 1865, that Emperor Franz Joseph I officially opened the Ringstrasse. Hence, the title of this post.

The Naturhistorisches Museum and the Kunsthistoriches Museum are mirror images of each other.

I think Franz Joseph was perhaps a tad premature in opening the Ringstrasse ― it would be some years before the construction of all those grand buildings would be complete and who wants to promenade past a noisy, dusty construction site? Not me and I speak from personal experience. But eventually the “Ring” was to become an enjoyable city promenade for Viennese and tourist alike ― as I learned during my first visit to the city ― and has remained so for 150 years.

All of the world’s large cities have ring roads, but only Vienna has a Ringstrasse. 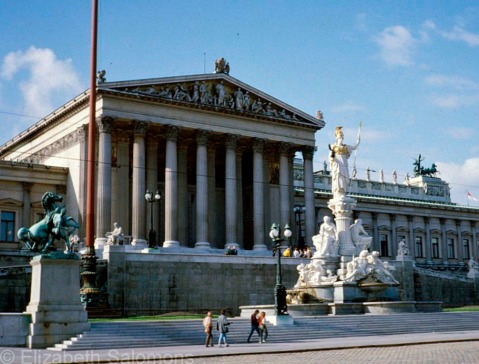 The Austrian Parliament Building is one of the largest buildings on the Ringstrasse.