When I applied to and was accepted at the University of Toronto, I enrolled as a student at Woodsworth College. I didn’t get the whole college-thing they had going at U of T, and didn’t much care what college they stuck me in, but eventually I discovered that all unclassified and part-time students (I was both) were lumped together at Woodsworth.

When I would introduce myself to my fellow undergrads, the first question after “What’s your major?” was always: “What college are you?” I quickly figured out that each college at U of T had its own personality, and prestige, and Woodsworth didn’t rank very high with respect to either.

This all seemed rather strange and unusual to me. In Western Canada, you applied to and enrolled in a faculty; in my case, I was a student in the Faculty of Arts at the University of Alberta. Colleges were independent entities, completely separate from the universities; I had attended one of those as well before transferring to U of A.

Like I said, I didn’t “get” the whole college-thing they had going at U of T.

Until I got to Oxford, that is.

Oxford is chockfull of colleges ― 38 of them, in fact ― and as I wandered around the “city of dreaming spires,” I came to the realization that the University of Toronto is modelled after the University of Oxford. So that’s where U of T got the idea for all those colleges, I said to myself.

Many of the colleges of Oxford University are open to the public, and I walked reverently through several of them. I happened to walk by the entrance to the chapel of Magdalen College (where C.S. Lewis taught) and was warmly invited to attend the Choral Evensong service that was about to begin. In the Great Hall of Christ Church College, I was greeted by an elderly gent whose sole job seemed to be pointing out the “Alice” window to visitors. (That would be the stained glass window put in to commemorate the author Lewis Carroll, who had been a Christ Church scholar.)

Oxford is a beautiful town. I explored it while on walkabout in the English countryside some years ago, fell in love with it, and made a promise to one day return to it. 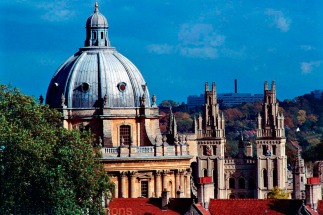