When I was flying back from New York the other month, I watched a couple of episodes of Anthony Bourdain’s show Parts Unknown on the plane, including the episode he shot in Newfoundland. (If you haven’t seen it, do. It’s hilarious and oh-so-Canadian.)

A world without Anthony Bourdain is all the poorer, I thought as I looked out my window somewhere over the American Midwest. The celebrity chef, travel writer, and TV personality died six months ago today. I had this sad anniversary in mind while working on my last post about Le Bernardin. Eric Ripert was a close friend of Anthony’s, and he appeared on his shows many, many times. They were together in France, filming an upcoming episode of Parts Unknown, when Anthony died.

The first Anthony Bourdain show I ever watched was an episode he filmed in Provence for No Reservations. My sister had recommended his show to me; I had never heard of the guy and had absolutely no expectations. But I went to YouTube, clicked on the episode — and have been a fan ever since.

One line of dialogue in the episode about Provence always stuck in my memory. Anthony was preparing a meal for his new Provençal friends and he was quite nervous about messing it up. He set his dish of ratatouille down in front of them, they tasted it, nodded politely, and then said, “It’s true that your ratatouille is very handsome.” After much laughter, Anthony asked what he got wrong. They replied, “You didn’t miss anything. It’s just … not a ratatouille.”

I remember laughing out loud at that point. Food is so much a part of the travel experience, and we try our best to replicate what we eat elsewhere when we are back home again, but most of the time we fail. It’s never quite the same. Rewatching the episode now, after the dozens of Anthony Bourdain TV shows I’ve watched since, I marvel at his self-awareness. It’s a rare quality that few celebrities (and, to be honest, men) possess.

A traditional dish from the south of France, ratatouille is essentially stewed vegetables. Like many French dishes, its origins are simple: it was a way for peasants to use what they had readily available in their gardens.

Last summer, I made a lot of ratatouille. It was a very good year for zucchini at my local farmers market and every weekend, I came home with bags of the stuff — all shapes and all sizes. And whenever I saw my sister, I was given bowls of tomatoes and handfuls of basil and thyme from her garden. What better dish to make than ratatouille when you have more fresh vegetables and herbs than you know what to do with?

This recipe is based on several versions, including Anthony’s. Vary the quantities according to your own preferences. I like to use cherry tomatoes, but if you use full-size tomatoes, you probably want to peel and seed them. If your squash are on the larger size, quarter the slices. Make sure your eggplant is on the smaller side as you want each cube to have a bit of the skin. And, most importantly, cook each vegetable separately to help retain their shape and texture.

I’m sure what follows is also “not a ratatouille,” but in my humble opinion it tasted all right. 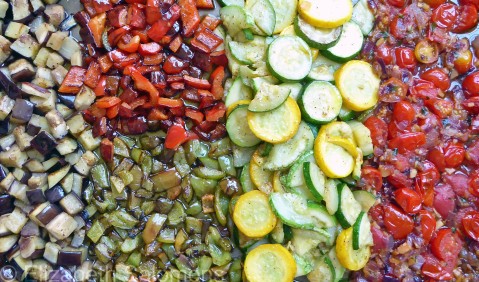 1. In a large, high-sided frying pan, heat several splashes of olive oil over medium to medium-high heat. Add the onion and garlic. Cook until soft, then remove from the pan and spread out on a cookie sheet to cool.
2. Wipe out the pan and repeat with the cherry tomatoes. When they are beginning to soften, smush them with the back of a wooden spoon to release their juices. Cook a little bit longer, then season with salt and pepper. Transfer them to the cookie sheet, keeping them separate from the onions and garlic.
3. Repeat with the remaining vegetables, wiping out the pan, seasoning with salt and pepper, and transferring to the cookie sheet each time.
4. When all the vegetables have cooled to room temperature, combine them in a large mixing bowl. Add the thyme, basil, and balsamic vinegar, and adjust seasoning if necessary. Let the mixture sit at room temperature for 3 or 4 hours before serving to let the flavours blend. Serve reheated or at room temperature. 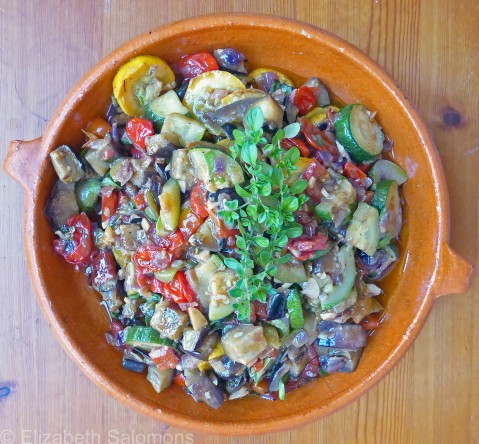