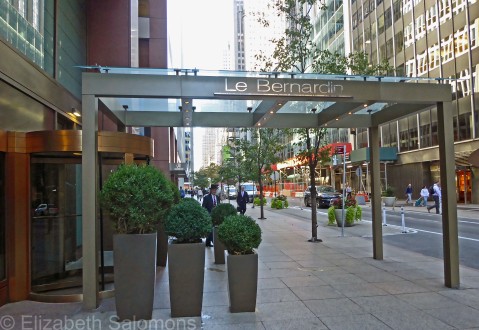 While in New York the other month, my sister and I treated ourselves to lunch at Le Bernardin. This New York institution has maintained its three Michelin stars for the past 14 years and, just last week, it was named the world’s best restaurant by La Liste, a Paris-based ratings organization.

Hee. It was quite the lunch.

Le Bernardin specializes in seafood, which seems like a natural choice given that the restaurant’s founders, Gilbert and Maguy Le Coze, grew up in Brittany, on the French coast. This brother and sister opened their first restaurant in Paris in 1972, calling it Les Moines de St. Bernardin after a song their restaurateur father used to sing about an order of monks who loved to eat and drink. When Gilbert and Maguy moved to New York in 1986, they simplified the name of their new restaurant to Le Bernardin.

Eric Ripert, who was only 26 when he joined the restaurant in 1991 as Chef de Cuisine, took over as Executive Chef after Gilbert’s sudden death in 1994. He is now a partner in the restaurant. When I got home from New York, I read Eric Ripert’s book, On the Line, which describes the inner workings of the restaurant. Want to know what I learned?

Le Bernardin is a machine.

In order to serve some 1200 dishes every day, 800 pounds of fish are delivered first thing in the morning. All of it is butchered on site — a process that takes six hours. To make 240 sauces each week, the restaurant goes through, per day, 10 pounds of shallots, 5 pounds of garlic, 10 pounds of ginger, and 30 pounds of butter.

One neat thing about Le Bernardin, by the way, is that the day’s leftover food is donated to City Harvest, an organization that feeds one million New Yorkers each year.

Le Bernardin is on the ground level of a non-descript office building in Midtown Manhattan with screens hiding the interior from the street. If you didn’t know where to go, you wouldn’t know it was there. But once you are inside, it’s as if you’ve entered another world.

The service was seamless. We lost count, but my sister and I think there were at least seven people waiting on us. And because all staff are full-time, there are no actors moonlighting as servers at Le Bernardin. Instead, you are surrounded by professionals.

The menu consists of three parts: Almost Raw, Barely Touched, and Lightly Cooked. For the three-course prix fixe that my sister and I ordered, we were instructed to order one dish from the left side of the menu (Almost Raw and Barely Touched) and one dish from the right side of the menu (Lightly Cooked). I had Barely Cooked Scallop with Sea Beans and Bonito Butter Sauce and Pan Roasted Merluza with Stuffed Zucchini Flowers and Brazilian Shrimp Moqueca Sauce.

I apologize for the lack of photos. I was too overwhelmed with what I was seeing and tasting to pull out my camera.

When it came to my third course, however, there was no question that I had to document the moment. This is a Golden Hazelnut Sphere with Frangelico Mousse and Praline Ice Cream.

Yes, that is gold leaf on the hazelnut sphere.

I don’t know if New York’s streets are paved with gold, but this I do know: its pastries sure are.