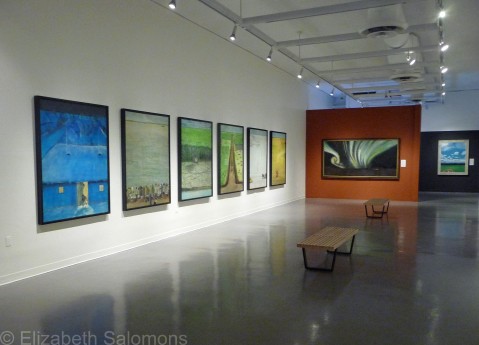 The other week when I was in Victoria, I went out of my way to stop in at the Art Gallery of Greater Victoria. I wanted to see William Kurelek: The Messenger.

I was expecting one room, maybe two, with a handful of paintings, but this exhibition completely exceeded my expectations. It is one of the largest-ever retrospectives of Kurelek’s work ― some 80 pieces ― and opened in Victoria earlier this summer after appearing at the Winnipeg Art Gallery and the Art Gallery of Hamilton.

William Kurelek was born in Alberta in 1927, moved to Manitoba as a child with his family, worked as a lumberjack as a young man to earn money for art studies, and eventually settled in Toronto, where he married, raised a family, and painted. He died there in 1977.

Before he settled in Toronto, Kurelek travelled to England because he had heard the English were doing interesting things with art therapy. He checked himself into a psychiatric hospital and spent the next seven years in and out of hospital. Some of the paintings he did as part of his therapy are included in this exhibition. They are disturbing images, filled with evidence of his illness. But in them you also see the influence of Bosch, Bruegel, and Vermeer ― artists whose work Kurelek studied while in Europe, and whose work would be life-long influences on his style.

While in England, Kurelek converted to Catholicism. At that point, he began painting Biblical scenes and subjects. Later, after his return to Canada, he took on apocalyptic themes as he reacted to world events such as the Cuban Missile Crisis. Kurelek saw himself as “the messenger,” tasked with spreading moral and Christian messages through his work. Although the prairies are a central theme in his artistic vision, even his pastoral landscapes have a mushroom cloud on the horizon, or a crucified Christ at the edge of a freshly plowed field.

Most of us know Kurelek’s artwork from his illustrated children’s books that are now Canadian classics. I don’t remember when I first was introduced to his work ― I suspect it was in grade school by one of my teachers ― but I appreciate it because I’m interested in the themes Kurelek explored: the prairies, landscape, place, memory, the immigrant experience, and Christianity. He was an avid photographer as well, and used his camera as a view finder to find subjects to paint.

Canada has a great tradition of landscape painting. Unfortunately, when asked to name a Canadian landscape artist, most of us don’t get much beyond the Group of Seven. Maybe Emily Carr. William Kurelek, I’m now convinced, is one of Canada most underrated artists. William Kurelek: The Messenger is at the Art Gallery of Greater Victoria until September 3.