The Franklin Delano Roosevelt Memorial is quite different from the other presidential memorials I’ve already posted about.

For one thing, there are no columns!

For another, it’s made not of white marble, but of red granite from South Dakota.

And, lastly, it’s spread out over 7.5 acres, half-hidden by a small copse of trees. It’s not a DC landmark in the way the other memorials are.

The memorial was designed to be accessible to people with disabilities, out of respect for FDR’s paralysis from polio. There are no steps or stairs anywhere. 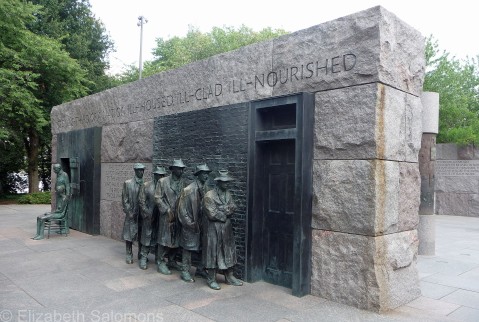 It’s also a new monument. Designed by a landscape architect named Lawrence Halprin, it took three years to build and was dedicated in 1997.

Franklin Delano Roosevelt, 32nd President of the United States, was in office from 1933 to 1945, for a total of twelve years, one month, one week, and one day. The memorial consists of a series of outdoor “rooms,” one for each of his four terms in office.

Each room contains a waterfall, and each waterfall is progressively larger and more complex to represent the increasingly difficult problems FDR faced during his presidency. I entered the memorial from the “wrong” side, however, so the symbolism was lost on me. 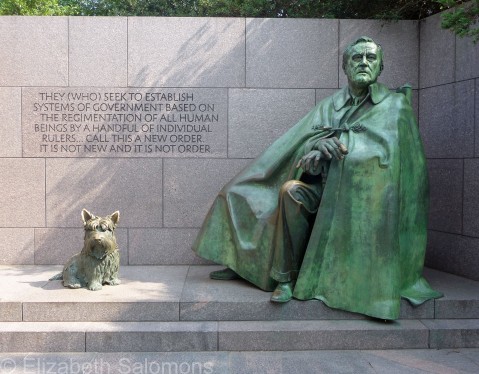 In addition to the waterfalls are various sculptures of FDR …

… and of significant events during his time in office, such as … 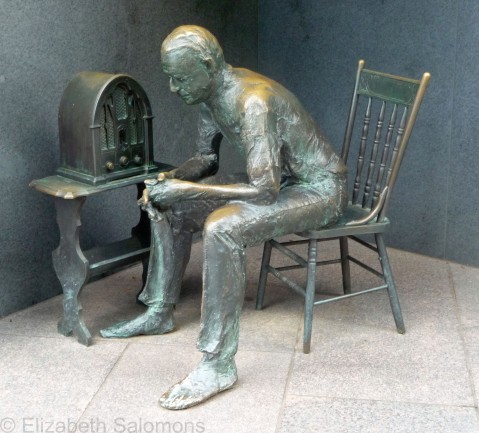 Scattered amongst the sculptures, carved into the granite walls, are words spoken by FDR. The above quotation is my favourite.

There is also a monument to the First Lady. Eleanor Roosevelt stands before the United Nations emblem to honour her role as one of the first delegates to the UN.

FDR served his country during one of the most turbulent decades of the 20th century. Ironically, I found his memorial to be the most peaceful of the presidential memorials I saw in DC.