The next stop on our Provençal tour is Avignon. Located about 21 km south of Orange, Avignon is the capital of the Vaucluse département. It’s a city that draws in the tourists for a goodly number of reasons:

About those walls. They date back to the fourteenth century and were built by Pope Innocent VI, who decided the expanding city needed new defensive ramparts. It was at the height of the Hundred Years’ War, so you can’t really blame him.

About that papal palace. For about 70 years in the fourteenth century, seven consecutive popes lived in Avignon instead of Rome. Why, you ask? Well, it all began when a Frenchman, Clement V, was elected pope in 1305 and decided he didn’t want to leave home. So he set up house in Avignon instead, which back then was part of the Holy Roman Empire. The next six popes after him followed suit. Eventually, Pope Gregory XI moved the papal court back to Rome in 1378. (Incidentally, Gregory XI was the last French pope. I guess the College of Cardinals had good reason to never again select a Frenchman as pope.)

But Gregory XI didn’t live long, and after an Italian was elected pope, the French cardinals turned around and elected a second pope who lived in Avignon. This started a new line of Avignon popes and a period that came to be known as the Western Schism. It went on for a while, with one pope in Avignon (today referred to as the anti-pope) supported by the French and one pope in Rome supported by the English. At one point, the cardinals decided to get rid of both popes and elect a new pope, but the first two refused to step down. Which meant there were three popes in all.

What a confusing time it was. (Almost as confusing as our own!) At any rate, all was resolved by the Council of Constance of 1414 to 1418, which declared the concave of 1378 — and the anti-popes of Avignon — invalid.

Avignon remained part of the Papal States until the French Revolution. The papal palace (Palais des Papes) was built between 1334 and 1363.

Incidentally, it was because so many popes were running around Provence that we have the excellent wines known as Châteauneuf-du-Pape (literally, “new castle of the pope”). Châteauneuf-du-Pape, a town about 12 km north of Avignon, is where Pope John XXII built his castle, which has been more or less demolished since, but it was he and the other popes who planted the vineyards. (Thank you!)

And now, finally, about that bridge. Its correct name is actually Pont Saint-Bénézet, after its builder. Built in the early twelfth century, floods washed away 16 of its original arches, leaving only four still standing. It’s a bit odd to stand on the edge of this bridge, singing a children’s song to yourself, but that’s how it’s done in Avignon. 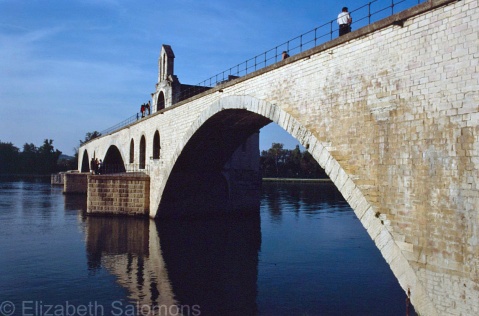