Happy New Year, everyone! I think we’re all glad to see the backside of 2016, but the big question for today is: what will 2017 bring us?

For Canadians, 2017 is going to be one long party. Yup, it’s our sesquicentennial (enriching your word power, I am). All that fancy word means is this: we Canadians are celebrating our nation’s 150th birthday in 2017. Canada 150 is what we are calling this little party.

Canada came into existence, formally, on July 1, 1867, when the British Parliament passed the British North America Act of 1867 (commonly referred to as Confederation). But although our official birthday isn’t until July 1, the party is already well underway. Even Lonely Planet has taken note. It has Canada as the # 1 choice in its list of places to visit in 2017. It’s even posted a free PDF chapter of how to plan your trip. You can download it here.

The Canadian government is encouraging that spirit of travel and adventure by giving anyone and everyone (that’s you, me, and the entire world — everyone is invited!) free admission to any of its Parks Canada locations. Which are quite a few: 47 national parks, 171 national historic sites, and four marine conservation areas. You can order your 2017 Discovery Pass here.

As for my part in celebrating Canada’s sesquicentennial, I’ve decided to take you all on a cross-Canada photographic tour. I’ve been blessed by the opportunity to live in three different provinces of this great nation, and I have travelled from coast to coast to coast through much of the rest of the country. And so, at least once a month throughout 2017 (maybe more often if I get really excited about this), I will post a photo from a different province or territory of Canada.

To begin: the Broken Group Islands. Accessible only by boat, these islands are located on the west coast of Vancouver Island in Pacific Rim National Park Reserve. (Your 2017 Discovery Pass will get you there!) I’ve camped and kayaked in the Broken Group Islands twice already and hope to go back many more times as they are, quite simply, one of the most spectacular places I’ve ever been to. Anywhere.

The Broken Group Islands are also the westernmost point of Canada that I’ve been to. I took this photo in August 2008 from the beach on Gibraltar Island where my friends and I were camped. 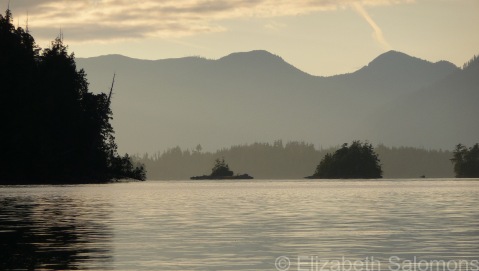