Here we are … finally!

It’s the last day of the year and the last day of the Canada 150 celebrations. (Although, because of the extreme cold weather alert in our nation’s capital, many of the outdoor festivities that were supposed to take place tonight in Ottawa to celebrate both New Year’s Eve and Canada 150 had to be cancelled. Only in Canada, eh?)

For my last post of 2017 and the last post of my Canada 150 series, I am sharing a photo I took along the fog-enshrouded Cabot Trail on Cape Breton Island. 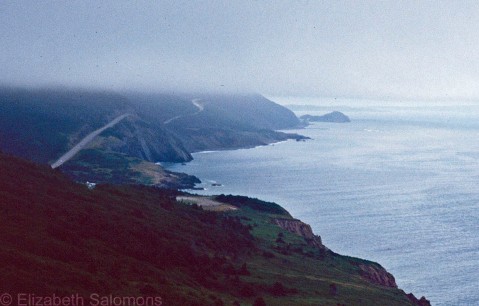 The Cabot Trail is 300 kilometres of winding highway that takes you through the Cape Breton Highlands. It’s named after John Cabot, the Italian explorer who bumped into Cape Breton (or maybe Newfoundland — no one knows for sure) while he was out looking for China way back in 1497.

Stunning scenery, isn’t it? The photo hardly does it justice.

I’ve been thinking a lot about Canada 150, and the year 2017 overall. That’s what we tend to do as the year winds down. What worries me is how smug we Canadians seem to be about ourselves at the moment. It’s easy to be smug, given everything that is going on in the Land of the Free and the Home of the Brave to the south of us. But smugness is a dangerous quality because it leads to complacency. And also the (misguided) belief that what is happening over there could never happen here.

Truth be told, we have no right to be smug. There are some awfully dark chapters in Canada’s history that have been glossed over throughout our Canada 150 celebrations.

On the east coast of Cape Breton Island is the Fortress of Louisbourg National Historic Site. It’s a reconstruction of the military fort built by the French in the eighteenth century, back when Cape Breton was part of New France and called Île Royale. Louisbourg was the first European settlement on Cape Breton and is a stark reminder that Canada’s origins are colonial.

Look up the word “colonize” — there is no way to soften its meaning. It is the process by which one group of people move in and take control of another group of people. And, no matter how many decades or centuries our ancestors have lived here, every Canadian is a colonist and a settler. Think about that when you next sing the national anthem. None of us — except our Indigenous peoples — can claim a “home and native land.”

If that doesn’t wipe away our smugness, I don’t know what will.

Any public event in Vancouver now begins with the acknowledgement that the land we are gathered on is the unceded territory of the Coast Salish peoples, including the Musqueam, Squamish, and Tsleil-Waututh Nations. I like hearing those words, but I do not want them to become so familiar that I hear them without thinking about what they mean.