I’m going to start this post off with a bunch of numbers.

That’s the number of Canadian soldiers who lost their lives at Vimy Ridge, a battle that was commemorated with 100th anniversary ceremonies last April. Another 7000 soldiers were wounded.

And here’s one more number: 1.

That’s the number of graves my nieces and I set out to look for last summer when we visited Canadian Cemetery No. 2 at the Canadian National Vimy Memorial. It’s a big cemetery, but we found the grave in minutes.

The grave we were looking for was this one.

This Cape Breton soldier was the great-grand-uncle of the wife of a friend of a friend of mine. How many degrees of separation between that soldier and me? I told my nieces it was five and they were all over the idea that they were the sixth degree. More numbers. Whatever the degree of separation, knowing that I knew someone who knew someone who was related to a Canadian soldier buried at Vimy Ridge gave all of us a personal connection to those horrific events of 100 years ago.

I have more numbers. The Vimy Monument stands at the highest point of Vimy Ridge — the piece of land that was fought over by 200,000 soldiers — and the 100 hectares surrounding the ridge were given to Canada by a grateful France in 1922 so that the monument could be built.

On the Vimy Monument are carved the names of 11,285 Canadian soldiers who died in France, but have no known grave. 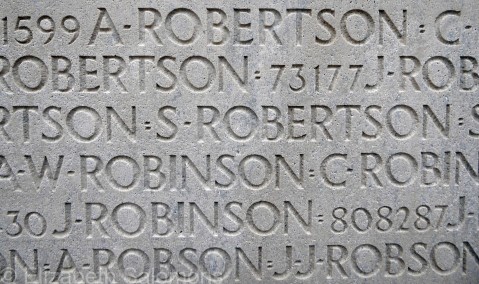 Because many of the soldiers’ bodies at Vimy were never recovered (it was and still is too dangerous to walk over No Man’s Land because of the unexploded ordnance), the entire memorial site is considered a cemetery.

Here’s a surprising number: 25. That’s the number of metres between the Canadian and German lines — about the width of a NHL hockey rink. You can see for yourself how short that distance is when you stand in one of the reconstructed trenches.

The guides who take you into the underground tunnels at the Canadian National Vimy Memorial are all Canadian university students. Those tunnels served two purposes: they protected the Canadian soldiers as they moved ever closer to the German lines, and they allowed the soldiers to plant the underground mines that were set off just before the battle began.

Not all of the mines exploded, which is why there is so much unexploded ordnance. The grass is kept short by grazing sheep that are too lightweight to set off the mines.

It is believed there are 10 miles of tunnels at Vimy, dug by miners who had the necessary experience in tunneling underground. Although you can’t go into the tunnels without a guide, you are free to wander about the rest of the memorial site as you will. 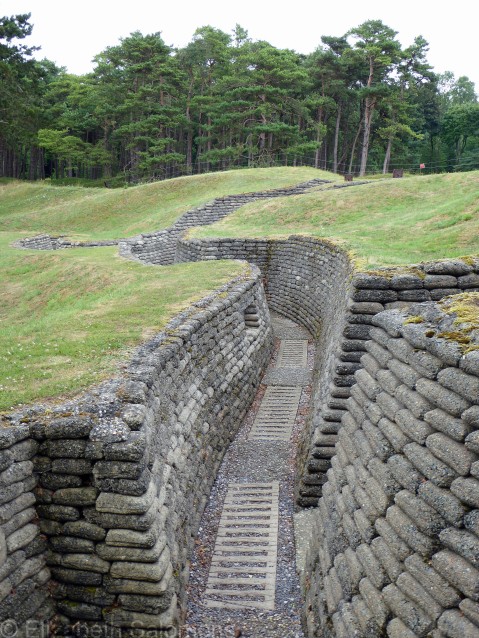 The Vimy Monument itself is striking. Designed by Canadian sculptor Walter Seymour Allward, it took 11 years to build and was dedicated in 1936. Allward said the image of the twin pylons, which represent Canada and France, came to him in a dream.

On the monument itself are 20 allegorical sculptures so poignant and moving that I’m going to let the pictures speak for themselves.

Back of the Monument

Breaking of the Sword

Sympathy of Canadians for the Helpless 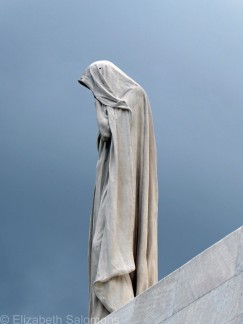 Front of the Monument

And here is one final number: 2.

That’s the number of hours it takes to get from Paris to the Canadian National Vimy Memorial by car (about the same by train and taxi).

As to the value of a visit to Vimy Ridge, I have no more numbers.