And … as quickly as it arrived, the snow is gone (although there is talk of more to come).

But enough about our wacky winter weather. Let me tell you about my first ever winter day hike. A bunch of weekends ago, I was hanging out in Whistler with a bunch of friends. Our plan was to do some snowshoeing, but we had just one problem.

There wasn’t nearly enough snow. (I told you it’s been a wacky winter.)

So the showshoes got left in the car, and we proceeded to trek through the woods in our winter boots.

The hike we chose was a relatively flat and short (3 km) walk to the Whistler Train Wreck. I had heard about this hike only a year or two ago, and had put it on my list of hikes to do, but hadn’t yet had the chance. 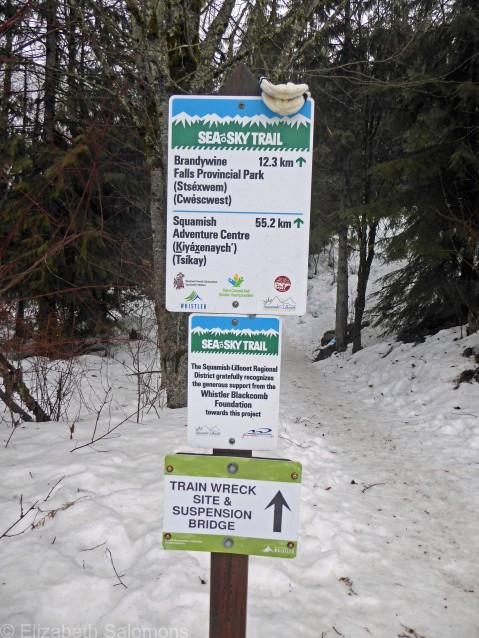 The Whistler Train Wreck consists of a bunch of boxcars scattered through the forest by the Cheakamus River. Not that long ago, the only way you could get to the site was by walking illegally along the railway tracks. But train conductors don’t much like that and would report you if they saw you so that the police were waiting for you as you exited the woods.

In 2016, a suspension bridge was built over the Cheakamus River and what used to be an unlawful ramble along the tracks is now a quick and easy hike connecting to the much longer Sea to Sky Trail. The trailhead is on the road to Cheakamus Crossing, a new subdivision of Whistler that served as the Athlete’s Village during the 2010 Olympics. 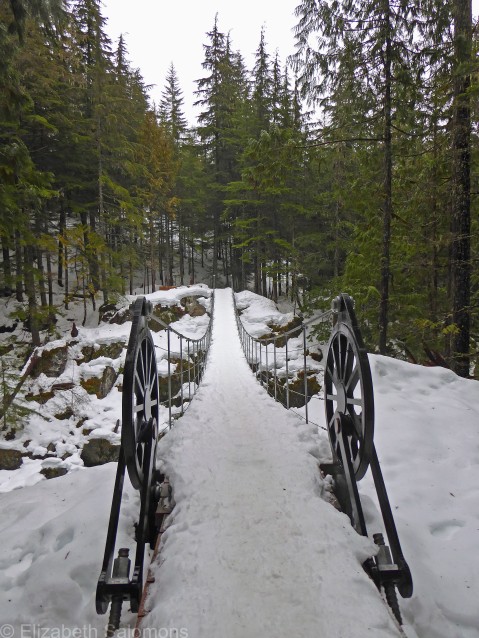 And how did a train wreck end up in the middle of a forest, you ask? A lumber train heading south from Lillooet derailed here in 1956. The seven damaged boxcars were dragged clear of the tracks by local loggers hired by the train’s owner, the Pacific Great Eastern Railway. Left scattered among the trees in the forest, they’ve remained there ever since.

The sight of mangled boxcars in the forest is a little surreal, to say the least. In winter, even more so.