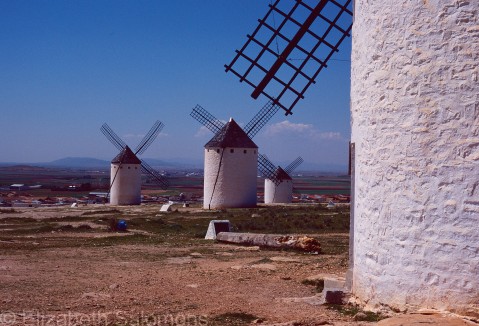 Destiny guides our fortunes more favorably than we could have expected. Look there, Sancho Panza, my friend, and see those thirty or so wild giants, with whom I intend to do battle and kill each and all of them ….”

“The ones you can see over there,” answered his master, “with the huge arms, some of which are very nearly two leagues long.”

“Now look, your grace,” said Sancho, “what you see over there aren’t giants, but windmills, and what seems to be arms are just their sails, that go around in the wind and turn the millstone.”

“Obviously,” replied Don Quixote, “you don’t know much about adventures.”

One adventure I was keen to experience for myself on our two-week jaunt around central Spain were those very windmills that Don Quixote had confused for giants. A photograph of the mills somewhere sometime had caught my eye, and I promised myself I would one day see them for myself.

And so I did. Windmills are a big part of my heritage, so maybe my love of windmills is in my genes. Or maybe it’s just because windmills are so beautiful. 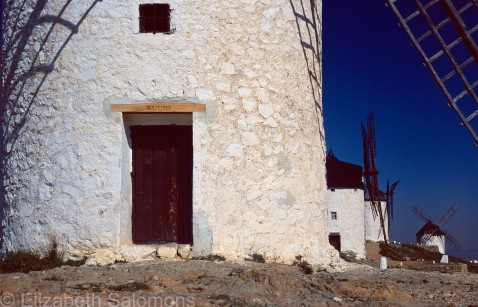 This first group of windmills are at Consuegra. Built in the sixteenth century, there were 13 mills originally, of which 12 have been reconstructed. They were in use up until the 1980s.

The next group of windmills we visited are the ones at Campo de Criptana. Here, there are ten mills altogether, situated at the edge of a village. It was very windy when we were here and we kept moving around the mills, trying to find a calm place in which to eat our picnic lunch, but to no avail.

The last group of windmills we stopped at were at Mota del Cuerro.

The landscape of this part of Castile La Mancha is flat, dry, dusty, and windy. Way off in the distance, there are mountains. It reminds me of parts of Alberta, actually, and that may be why I fell in love with this part of Spain. 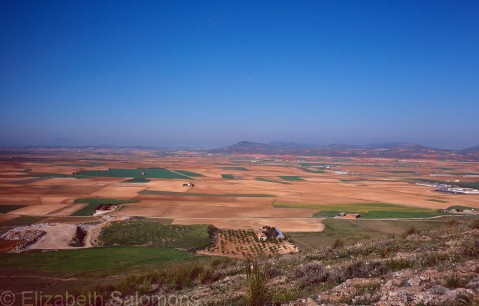 My memories of our visit to Castilla La Mancha and Castile and León are dim and faded, but revisiting the region through these blog posts has brought it all back again. Which has been lovely. It’s a region of Spain that doesn’t get a lot of attention, but deserves far more.

2 responses to “Tilting at Windmills”