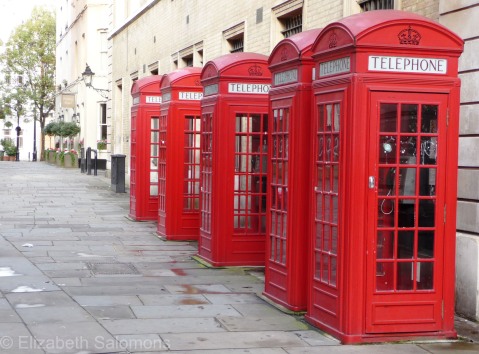 Last weekend I was out with friends who are busy planning a spring trip to England. I was pleased at how excited they are, and I had great fun answering their questions and throwing out suggestions of what I thought they had to see and do in London.

My brain kept churning after I said good-night to them, however, and by the time I arrived home I had another long list of must-sees and must-dos. At which point I said to myself, “Enough, already! There’s your next blog post half written.”

So, here it is: My ideal itinerary for a week in London.

Day 1: Direct flights from Vancouver to London arrive mid-day. Buy your Oyster card (more on that later) and take the Tube into central London. After check-in and a shower to wash the detritus of air travel off your body, set off for a few hours of sight-seeing. You’re jet-lagged, so find something simulating enough to keep you awake, but nothing too strenuous or that takes too much thought. A couple of summers ago, a friend and I zipped over to St. Paul’s Cathedral and went to Choral Evensong on our arrival afternoon. The services are held daily at 5 p.m.; for me, personally, there’s nothing more English than choral music at St. Paul’s. 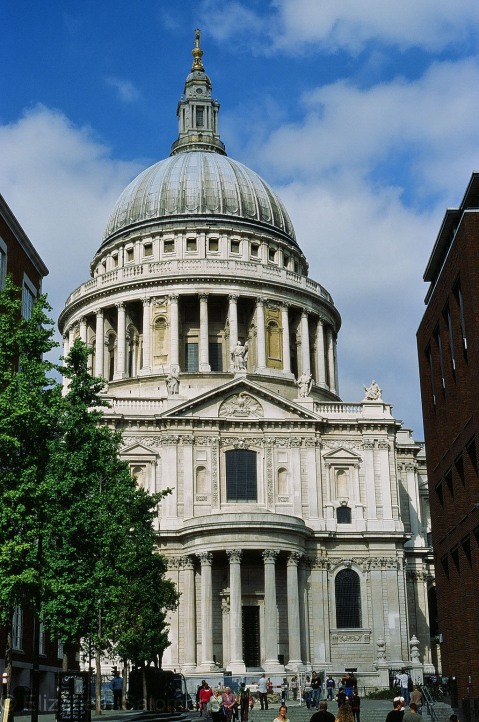 Or, if the weather is cooperating, take a walk through one of London’s beautiful parks to stretch your legs after the long flight. St. James’s Park and Green Park are beautiful, and from either park you can catch your first glimpse of Buckingham Palace. By this point, the fact that you are in London should start to feel very real.

Day 2: My friends will be in London too early to see Buckingham Palace as it’s open to the public in the summer months only. But Changing the Guard in the Palace’s forecourt takes place every second morning in the winter and daily in the summer. If you want to see this colourful ceremony, I have two words for you: Go Early. And if the crowds are too much for you, walk over to the Horse Guards Parade where you can watch a smaller change ceremony, or stake a spot anywhere along the Birdcage Walk to see the regiments as they pass by on their way to or from Buckingham Palace. 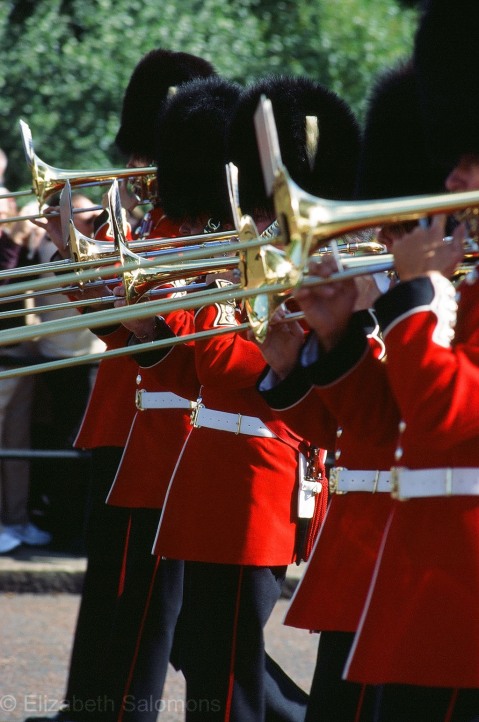 Changing the Guard at Buckingham Palace

In the afternoon, check out an art gallery. All of the major ones have free admission, so duck in and out of them throughout the week according to your mood. My advice, after you’ve decided on which gallery to go to (there are enough to suit any taste), is to choose a wing to focus on ― that’s plenty of viewing pleasure for one afternoon.

Bear with me now, as London has some heavyweights. The National Gallery houses Western European paintings from the 13th to early 20th centuries. The National Portrait Gallery is the British portrait collection from the 16th century to current day, and Tate Britain focuses on British art from the same period. (It has a particularly fine collection of works by J.M.W. Turner.) Tate Modern holds international modern and contemporary art.

If spending an afternoon looking at art is not your cup of tea, then I recommend the Churchill War Rooms located at the opposite end of St. James’s Park from Buckingham Palace. The museum is inside the actual bunker used by the British government during World War II.

Day 3: By now, your internal clock should be adjusted to Greenwich Mean Time, so you’re ready for a heavy day of sight-seeing. Buy your tickets online to avoid the long queues at the Tower of London, the highlight of which is the collection of Crown Jewels. I was 13 years old when I last saw the jewels, but I still remember how dazzling they were.

When you are finished touring the Tower, cross Tower Bridge and take a long walk along the South Bank of the Thames. You might stop for lunch at the many outdoor terraced restaurants. Or, treat yourself to a splendid meal at the top of the Tate Modern where you have a million-pound view of the Millennium Bridge and St. Paul’s.

Once fortified, continue walking until you reach the London Eye. If you are keen to get up high for a good view, this is the best there is. It’s pricey, but it will help you get your bearings if you’re still trying to orientate yourself in this massive city.

Charing Cross Station from the Jubilee Gardens on the South Bank

Day 4: If you enjoy museums, then the world’s your oyster in London. Again, they are all free admission. Head to the British Museum in the heart of Bloomsbury if history’s your thing, and don’t miss the Elgin Marbles on the main floor, just off the Great Court. When you are all mummied out, take a walking tour of what might be the most literary neighbourhood in the English-speaking world and see where Virginia Woolf lived and where T.S. Eliot worked as an editor.

Great Court of the British Museum

For more recent history, go to the Imperial War Museum. Walk to the Thames afterwards for a photo op of the Houses of Parliament. Once there, you’re just around the corner from Westminster Abbey. Both are open to the public. 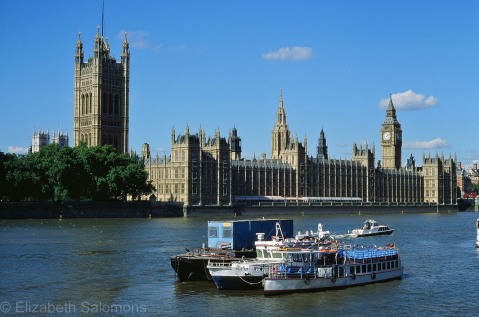 And if art and design are where your interests lie, you need to be at the Victoria and Albert Museum. Post-V&A, enjoy everything Hyde Park has to offer: Speaker’s Corner, the Albert Memorial, and the Diana Memorial Fountain are all within this vast park.

Day 5: It’s time for an excursion. Windsor, home of Eton College and Windsor Castle, is an hour from London by coach or train. Greenwich is closer and also offers a full day of sightseeing including the Royal Observatory, the National Maritime Museum, and the Old Royal Naval College, all situated in beautiful Greenwich Park. The Royal Observatory is the home of Greenwich Mean Time and the Prime Meridian (longitude 0° ― for those readers interested in this sort of trivia). 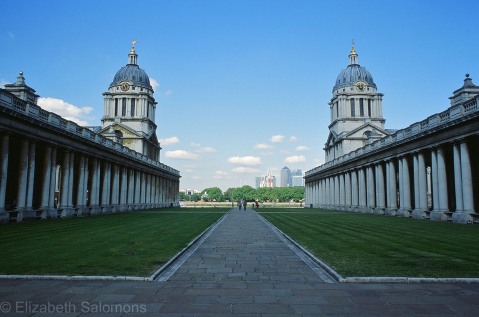 Day 6: If you find the big museums and galleries too intimidating, then take a day to check out some of the smaller ones. I can recommend Keats House in Hampstead, where the Romantic poet John Keats lived from 1818 to 1820, after which you must take a turn on Hampstead Heath. There’s also the Handel House Museum, where the composer lived from 1723 until his death in 1759, or the Sherlock Holmes Museum at ― you guessed it ―  221B Baker Street.

These last two museums are near Oxford Street. If you’re interested in a bit of shopping, this is where you want to be, but be aware that Oxford Street on a Sunday afternoon is as busy as any North American mall in December. Charing Cross Road is the street for bookstores, Portobello Road for antiques, and Camden Market is where you’ll find that one-of-a-kind souvenir to bring home to your kids. 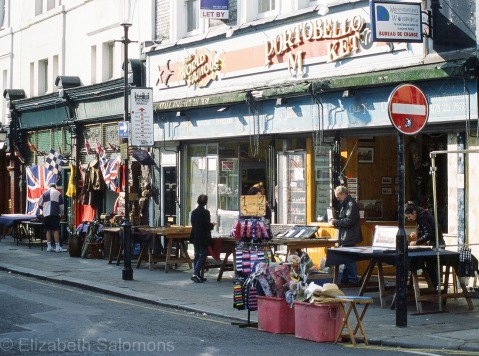 Day 7: Your last day! I’m sure there’s something on your list you still haven’t gotten to, so this is your chance to squeeze it in.

Wondering what to do in the evenings? If you’re into theatre, be sure to check out the board at the half-price ticket booth in Leicester Square. The deals are great, and the acting in London’s West End is the best I’ve ever seen. I still get goose bumps when I think of the mesmerizing performance I witnessed of Derek Jacobi, Trevor Eve, and Imogen Stubbs in Chekhov’s Uncle Vanya, which I watched from the front row of the Albery Theatre on St. Martin’s Lane. Or, bring back memories of your high-school English classes by taking in a play at Shakespeare’s Globe, the modern reconstruction of the original Globe Theatre.

My friend’s husband is a jazz musician, so they’ll be checking out some jazz clubs. Another option for live music is the opera; tickets to the Royal Opera House at Covent Garden are a bargain at £9 if you don’t mind sitting in the upper slips (and aren’t afraid of heights!). Book your tickets online before you leave home. Or find something you’re interested in hearing at Royal Albert Hall, if only to get a look at the inside of this magnificent concert hall.

A suggestion to help you save money on transit: buy an Oyster Card to use on London’s Underground. They are valid on both the Tube and the buses, and are much cheaper than buying individual fares. And remember, although the Tube is faster, nothing beats seeing London from the top of a double-decker bus. The Heritage Routemaster service (Route 15) is a fun way to get from Trafalgar Square to the Tower of London. 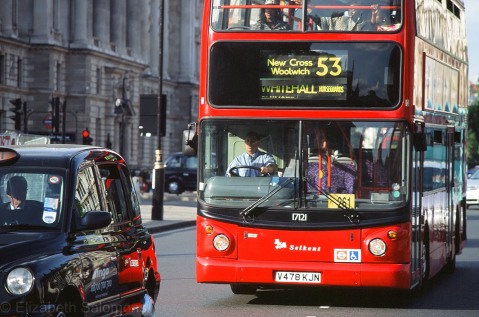 One of London’s iconic double-decker buses

So there you have it: my ideal itinerary for a week in London. One last bit of advice: leave something on your to-do list to make sure you come back. Because London is a city that requires repeat visits. 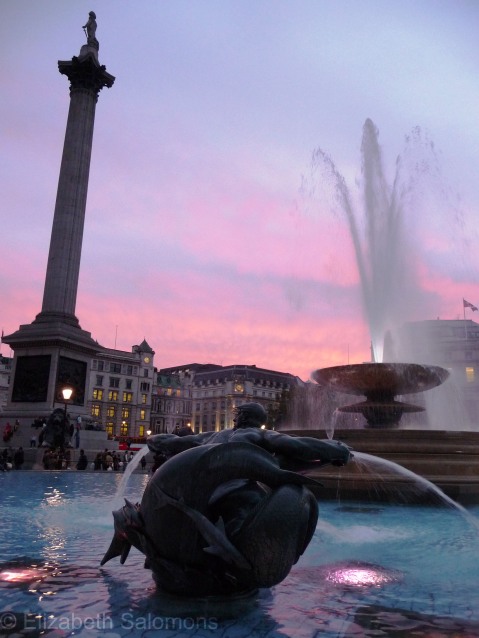 9 responses to “Seven Days in London”