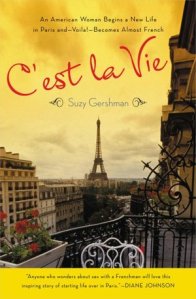 On my first-ever visit to Paris, I navigated the sidewalks as if I was playing a game of hopscotch. There was doggie-doo everywhere you looked (or, to be more precise, everywhere you stepped but didn’t look).

Fourteen years later, I was back in Paris, this time with my dad. The doggie-doo situation was much improved. But we chuckled together one night at dinner when we realized the incredibly stylish and well-manicured French matron dining alone at the table next to us had a small canine companion lying at her feet. We were most definitely not in Kansas anymore!

I thought about that dog the first time I read C’est la Vie by Suzy Gershman, which I read shortly before reading Almost French. C’est la Vie and Almost French nicely bookend each other because both are written by women who move to Paris at the urging of a man. And ― once each author is settled and starts to feel “almost French” ― each adopts a small dog (how French of them) that they take with them everywhere (how very French of them!). In Gershman’s case, this includes La Galerie at Hotel George V. Clearly a dog’s life in Paris is no hardship at all.

Suzy Gershman moves to Paris six weeks after the death of her husband, who has died only six weeks after being diagnosed with Stage IV lung cancer. She calls herself the Runaway Widow, and she lives in a hotel while searching for an apartment she can call home. This proves more difficult than she expects, but eventually she finds one in the 17e arrondissement. She then proceeds to set up house.

Gershman’s day job is writing shopping guides for cities all over the globe. Hence, she goes into incredible detail when describing the shopping she does to furnish her apartment. It’s natural she writes about what she knows, but the book is missing the in-depth analysis of French culture that I so enjoyed in Almost French. If Almost French is steak et frites, C’est la Vie is tarte tatin. Both add different elements to the meal, but, if I have to choose, I’m a meat-and-potatoes kinda gal.

However, I will be eternally grateful to Gershman for introducing me to Monoprix, the combination grocery-department chain store where I did most of my shopping when I was living in the 20e arrondissement. It was my favourite place to shop and I still miss it.