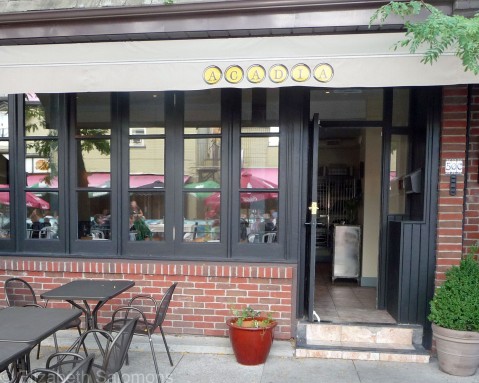 My friend was so impressed with our experience at Jean-Georges in New York City last summer that she decided we should check out some fine dining options in Toronto as long as I was in town. We decided on Acadia, which features the “flavors and techniques of Acadian and Lowcountry cuisine” and was rated by enRoute magazine as Canada’s fourth-best new restaurant of 2012. My friend (“C”) spends part of every summer in modern-day Acadia (aka Nova Scotia), she and I had travelled together many years ago to Louisiana, and I once spent a month in South Carolina, so we were both rather curious to see what Acadia had to offer on its menu.

Plus, a friend of C’s (“J”) ― also from Nova Scotia and in town for TIFF ― would be joining us. There was no debate. Acadia was our #1 choice.

(And we pause here momentarily for a brief history and geography lesson: Acadia, as I’m sure you all know, is that part of North America (present-day Maine, New Brunswick, Nova Scotia, and Prince Edward Island) settled by the French in the early seventeenth century. Its connection to Louisiana is that, when the British deported most of the Acadians between 1755 and 1763, many of them ended up in Louisiana, which at that time was still a colony of New France. Their descendents are known as Cajuns.

Not so well known (OK, yes, I admit it: I looked this up on Wikipedia) is the Lowcountry region. It’s the South Carolinian coast, and food typical to the area is known as Lowcountry cuisine.

That’s it for today’s lesson ― we now return to our regular programming.)

C and I arrived early, so we each ordered a bourbon-based cocktail to start. As we waited for J to arrive, we devoured an order of chicken cracklin’ with hot sauce and blue cheese. The cracklin’ are like thin, smooth potato chips, but they’re made from stretched chicken skin, not potatoes. I know, I know … it sounds disgusting, but trust me ― these are addictive. The blue cheese was foamy and light, and we scooped it up with each cracklin’ like dip. 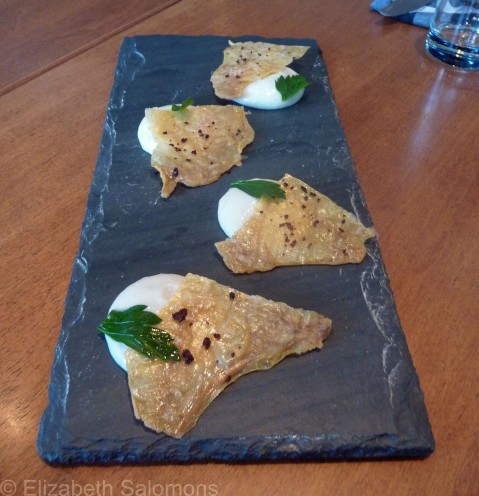 When J arrived, appropriately famished as well, he ordered a beer and we ordered another round of the chicken cracklin’, as well as the spiced beer nuts, flavoured with brown butter and paprika, and Acadia’s cornbread, which is served with whipped pork butter and mesquite. 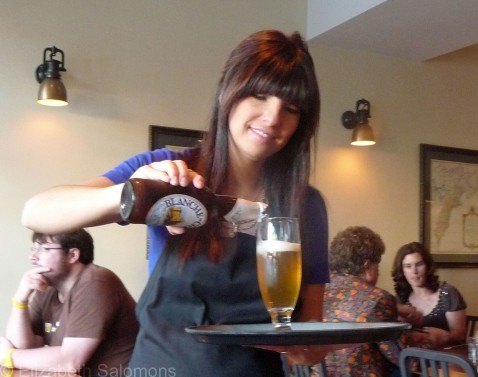 After the nibblies and drinks were gone, we were ready for the serious stuff. We each ordered a different starter. C choose Anson Mills grits with Gulf prawn, oyster mushroom, pimento cheese, and ham hock consommé. Anson Mills is located in South Carolina, so these were the authentic southern grits I remember. I came to like grits mixed with scrambled eggs during my month of South Carolinian breakfasts. I like grits with eggs; I like grits for breakfast. But as a starter? With prawns? Never mind — C was happy. She gave me a taste, but I’ll be honest: not my favourite and I found it a curious dish.

J ordered the charred octopus served with crispy pork belly, tomatillo, new potato, spicy collards, and a black vinaigrette. He summed it up as simply the best octopus he’d ever eaten. I’ll admit I had some regrets on not ordering it when I saw his plate.

I had chilled corn soup with andouille, yellow plum, smoked cream, and tarragon. All the texture was in the andouille and plum that lay at the bottom of the bowl because the soup was as smooth as consommé. I soon got over my octopus-regret; my soup was delicious.

Before the arrival of our main courses, our server came by with the most sincerest of warnings. We needed to prepare ourselves. More accurately, I needed to prepare myself, because, in her words, I was about to experience “some serious food envy.”

She wasn’t kidding. C and J had ordered the special of the night: an entire braised veal shank to share. It left all three of us speechless. It was encircled by chanterelle mushrooms and tomatoes of a variety of colours. 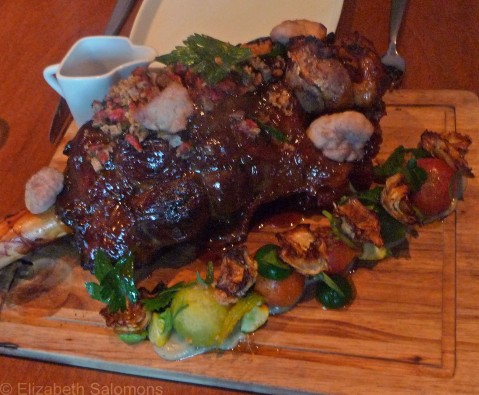 So magnificent it deserves a second photo

I had scallops (miniscule, our server teased me, compared to the veal shank), with shaved foie gras, celery purée, pecan, Concord grape, and scuppernong mustard. Scallop is one of my favourite types of sea food, so I can be quite forgiving, but no need this time. They were excellent. But I also had a few bites of the veal shank, and had to admit that it too was delicious.

It didn’t take long before J and C admitted they were defeated. Truthfully, that hunk of meat was enough for four people. Our server grinned. “Oh, so it’s going to be lunch tomorrow?” she asked.

C piped up that she would appreciate some suggestions on what to do with the veal in the way of leftovers. “I don’t want to ruin it,” she said. We were surprised and delighted to see Acadia’s chef, Patrick Kriss, come to our table after we had been served our desserts, speaking most earnestly, and advising C to braise the leftover meat in chicken stock to retain the moisture. “Don’t put it in the microwave,” he warned. “That will dry the meat out.” We were all impressed by the attention he gave us ― although, if I think about it, it was probably the veal shank he was most concerned about.

For dessert, I had wild blueberry sorbet with peaches, lavender, and ricotta, while J and C shared a dark chocolate cremeaux with milk sorbet, pistachio, and cherries. Espresso to finish, and we were sated. My Toronto readers: if you’re interested in a medley of cuisines and a lesson in geography, check out Acadia. I highly recommend it. 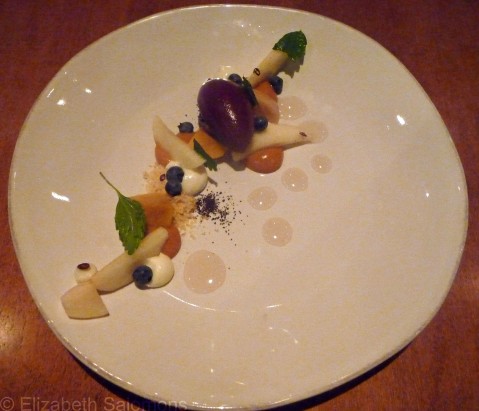