With a bit of a shock, I realized this morning that exactly five years ago today I stood shivering for several hours in the cold and rain across from the Arc de Triomphe in Paris. Just as it is in most provinces of Canada, including my own, November 11 is a public holiday in France. The French refer to it as Armistice Day, in recognition of the end of World War I, whereas in Canada we call it Remembrance Day. In both countries, tribute is paid to our war dead and our veterans, and the sacrifices they made on our behalf. This year, in particular, remembrance is being paid to the 70th anniversary of the end of World War II.

The reason the French perform this tribute beneath the Arc de Triomphe is because that’s where the Tomb of the Unknown Soldier is located. I didn’t have a great view of the goings on near the tomb that day five years ago (see above), but I was able to walk over afterwards and take some photos, which I’ve posted here. 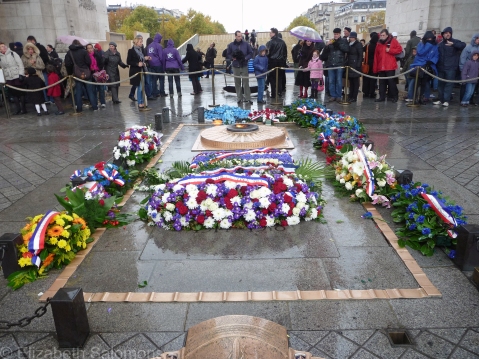 The largest wreath is always laid by the French president. The ribbon below reads “Le Président de la République.”

I don’t make it to the Remembrance Day ceremonies here in Vancouver every year, but every year I do proudly wear my poppy, even though, it seems, that simple gesture has become a political one. All I will say on that topic is this: there is nothing political about me being forever grateful to the Canadian soldiers who liberated my mother and her family from the tyranny of Nazi Germany. If not for them, I would not be here today.

For that reason alone, I will never forget.