On my first ever trip to the Netherlands ― the one that instilled in me my rampant travel bug ― our family visited Arnhem, the city where my mother was born and lived for the first ten years of her life before immigrating to Canada.

One morning, we went for a walk in a wooded park known as the Rozendaalse Bos. I noticed many damaged trees and asked Mom what the scars were from.

“Oh, those are probably from the war,” she said. “There was a lot of fighting around here.”

She said it so casually that I was shocked. The war (and by “the” war she meant World War II) was distant history ― so I thought ― and yet here was concrete evidence in trees still living. Maybe not such distant history after all.

That walk in the woods sparked in me a lifelong interest in learning more about World War II and what happened in Holland during those years. But it wasn’t until after my visit to the Normandy beaches with my dad that I began to do some serious research into exactly what happened to my mother’s family during the war.

I began by showing my uncle some letters my grandmother had written to me (at my request) about her childhood and experiences in Holland during the war. To my surprise and delight, he translated them for me (they were written in Dutch). After I read them, he and I spent a sunny, summer afternoon in his backyard, talking about the war and, in particular, his own personal experiences. He was able to fill in a lot of the gaps in the stories my grandmother had written down for me and the others that my mother had told me.

After I had exhausted my uncle with my questions, I began to read books. Many books. Much has been written ― is still being written ― about what happened in Arnhem during the war. Eventually I stopped reading and decided I had to visit Arnhem on my own.

I made several trips, each time exploring the quarter where my mother grew up as well as the rest of the city. I walked some of the streets I had read about in all those books. Much of what my uncle had told me, and much of what I had read about, came alive for me in the way that can only happen when you visit a place in person.

In 1944, Arnhem was the site of a major offensive by the Allied forces called Operation Market Garden. It was the largest airborne operation ever attempted, and was meant to hasten the end of the war by having the Allied forces leapfrog over the German lines into Holland. Once there, they would be in range of the industrial heartland of Germany. Capturing and holding three bridges over the Rhine River ― one at Eindhoven, one at Nijmegen, and one at Arnhem ― was the key to the whole operation. The American 82nd and 101st airborne divisions landed respectively at Nijmegen and Eindhoven and the British 1st Airborne Division landed at Arnhem.

Despite holding the bridge for days longer than planned, the British paratroopers ultimately had to withdraw. The bridge at Arnhem turned out to be “a bridge too far.” (That was the name given to Sir Richard Attenborough’s Hollywood film about Market Garden, which I watched on TV with my mother and grandmother not long after my first visit to Arnhem. And, yes, I peppered them both with questions during the entire movie.)

My mother’s family came through the battle relatively unscathed. Although their house was less than three kilometres from the bridge and they could hear the fighting, they were free to walk through the streets of their neighbourhood even while the centre of the city was under fire.

It was after the battle, when the Nazis evacuated the entire city, that things got rough. My mother remembered living in a barn ― my uncle told me it was only for a week. When the Germans told them to leave the area, they said, “But what about our cows?” The Germans replied, “Oh, you can go live over there,” and waved them off. “Over there” was a neighbourhood near the edge of the city that had already been evacuated.

They lived there, in someone else’s house, for almost a year. Not only did they and all the citizens of Arnhem have to wait for the city to be liberated by the Canadians, but it took months for the soldiers to clear the city and the houses of all the mines and booby traps left behind by the Nazis. My grandparents hid all of their canned goods under the floorboards before they left their home, but none of it was there when they returned. The Nazis had systematically looted most of the city.

My uncle spent most of that winter trying to evade the Nazis who were rounding up boys for the arbeitsdienst. (Military training with a shovel, he called it.) The Nazis took him once while he was taking care of the family’s cows, and another time during a razzia (raid) when he went for a short visit to the house where the rest of the family was living. He escaped both times, the second time by lying down in a ditch and pretending to be dead. He told me he was lucky he wasn’t shot.

And the final, most awful hardship of the war for my mother’s family was losing a son and brother (another of my uncles) who was killed by a piece of shrapnel from a shell that exploded in front of the house where they spent that winter. He was thirteen years old and Arnhem had been liberated just the day before.

It wasn’t until after I wandered through the neighbourhood where my mother’s family spent the winter of 1944 to ’45, on one of my visits to Arnhem, that all the pieces of the stories I had been told by my mother and grandmother and uncle came together for me ― the Rozendaalse Bos, which is the wood where my mother told me was the scene of so much fighting, was only a couple of kilometres distant. It was not hard to imagine how a stray shell ended up in front of their house, killing my uncle.

I’m writing this post because today is the 70th anniversary of the start of Operation Market Garden. Arnhem commemorates the anniversary every year, but it’s not the battle they’re celebrating. They’re celebrating the British paratroopers who tried so hard to end the war early for them. Annual events include a service at the Airborne Cemetery at Oosterbeek and a parachute drop by serving British paratroopers at Ginkel Heath (one of the drop zones during the battle).

I was in Arnhem in 2004 for the 60th anniversary. That year there was also a veterans’ parade across John Frostbrug and a convoy of vintage military vehicles from Oosterbeek to Arnhem. The applause for the soldiers never stopped; watching the Dutch people respond to the British vets, I couldn’t help but wonder what it would have been like to watch the Allied soldiers march past at a time when the Dutch were so desperate for the war to be over.

I watched the TV news that evening; one of the vets interviewed talked about what a mess they had made of the city and how it had pretty much been destroyed. “And yet,” he finished, “they love us!” While watching the parade on the bridge, I overheard another vet tell his family how he hadn’t paid for a single meal or drink since his arrival ― the Dutch kept picking up the tab.

And that was the moment. I realized then, finally, while eavesdropping on a vet and his family, that the hardships my mother’s family endured weren’t much different from what a lot of Dutch families ― and the Allied soldiers and their families ― went through during the war.

Each of us travels for a variety of reasons; researching your family’s history can be a powerful one. A walk through a battle-scarred wood set me off on a journey to find out what happened to my mother’s family during the war, culminating in a visit to Arnhem on the 60th anniversary of Operation Market Garden. They’re all gone now ― my mother and her family. But I’m so very glad I thought to ask them so many questions when I had the chance. 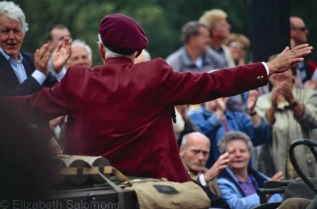 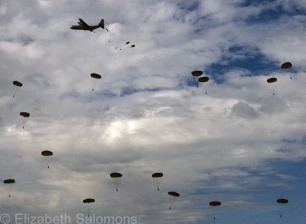