Through My Lens: The Whitney 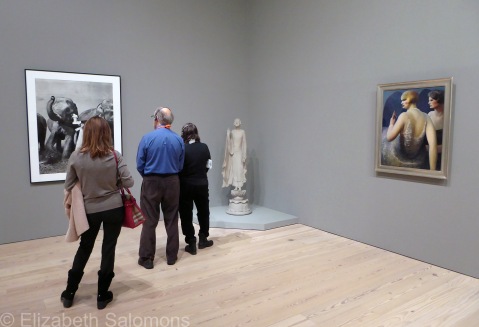 This photo shows some more of the art you can see in New York. At left is a photo by Richard Avedon and to the right is a painting by Guy Pène Du Bois. The sculpture in between is by Gertrude Vanderbilt Whitney, an American sculptor and art collector.

When Gertrude Vanderbilt Whitney offered her collection of work by American artists to the Metropolitan Museum of Art, it was refused. So she turned around and opened her own museum. The Whitney Museum of Art, which focuses on American art, opened in 1931 in Greenwich Village. It has had a number of homes since then, but its latest, a purpose-built building at the south end of the High Line, opened in 2015.