Fountains Abbey was founded by 13 rebel Benedictine monks from St. Mary’s Abbey in York. They were sent packing because they wanted to live by a stricter rule than the Rule of St. Benedict that the monks in York followed.

The rebel monks were given 70 acres of land in a valley near Ripon in North Yorkshire. They decided to establish a Cistercian order, which is a French monastic order. Cistercian monks supported themselves by farming. The land near Ripon had everything the rebel monks needed: a valley setting to shelter them from the North Yorkshire weather, stone and timber for building, and plenty of water. The name of the abbey, St. Mary of Fountains, is thought to have originated from some nearby springs.

Not long after founding their abbey, the monks built a church out of stone. The Great East Window above the Chapel of Nine Altars behind the High Altar is featured in this photo, which I am posting for the Second Sunday of Lent. 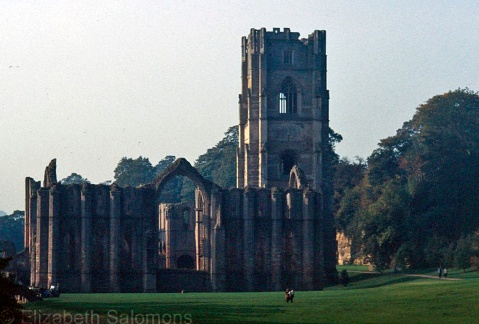