Our road trip up the Dempster led us, eventually, to Inuvik. Located 200 km north of the Arctic Circle, Inuvik was built in the 1950s in its present location in the Mackenzie River delta to function as the region’s administrative centre.

Inuvik is the northernmost point of Canada that I’ve ever been to. Until this year, it was also the northernmost point in Canada that you could drive to in the summer. In the winter, the Dempster Highway continues north to Tuktoyaktuk for another 194 km along an ice road formed on the channels of the Mackenzie River delta and the Arctic Ocean. This ice road was only open during the winters, but is being replaced by a new all-season road scheduled to be finished by the end of next summer.

Our Lady of Victory Parish, or the Igloo Church as it is often called, is the community’s Catholic church. It was designed by Brother Maurice Larocque, a missionary from Quebec who spent his entire ministry working in the North. Before he became a priest, he was a carpenter, and he used his skills to design a church that reflected the people who would worship in it. The church was built in the shape of an igloo to be able to deal with the shifting permafrost it stands on.

The Igloo Church is the most photographed building in Inuvik. Naturally, I had to take a photo, too. 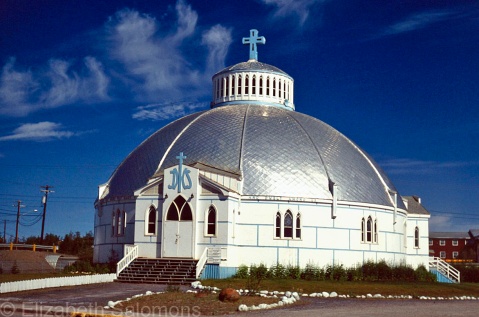