So, the all-important question is: when you have less than a week in Paris to impress your nieces with all you know about the City of Light, where do you take them to eat?

In my case, I took them to Bouillon Chartier, which was recommended to me by my Parisian friend. He described it as “an authentic French brasserie” that offered cheap but tasty food and had servers that were rude as … well, I can’t repeat what he wrote on a family blog such as this, but when I read his text to my niece, she raised her eyebrows and said, “Um …”

Needless to say, by this point in her European travels, she was more than a little homesick for polite Canadians.

We walked in through the revolving doors and were quickly seated. The décor looked like something out of a Belle Époque movie set, with coat racks set high above a cavernous room lined with mirrored walls and filled with endless rows of tables lit by giant globe light fixtures.

Soon our black-vested, white-aproned waiter came to take our order, which he scribbled down on the paper tablecloth. He was polite, friendly, and extremely patient as I gave him our order in my poorly enunciated French. As soon as he walked away, my nieces turned to me in shock.

“He wasn’t rude!” they exclaimed.

So far, so good. I was hopeful.

But then our food arrived within minutes. “Uh oh,” I thought. “What’s going on here?” We wolfed down every bit of it, however — we were hungry — and some of it was very good, and some of it, well, was not so good.

The girls were keen to try the escargot — they were in France, after all — which were served à la Bourguignonne (in the Burgundy style) with heaps of parsley and garlic butter. They went fast, and we used the most excellent bread to mop up every last bit of butter that remained.

I had confit de canard (duck), which I have to say was a bit tough. My pasta-loving niece ordered spaghetti bolognaise, which she told me later had been cold, and my oldest niece ordered poulet fermier rôti avec frites (roasted chicken with fries), which apparently was unseasoned.

So much for impressing my nieces with excellent French cuisine. However, as I already said, we all of us cleaned our plates and you can never go wrong with French bread and wine. We decided not to have dessert as our next destination was a pâtisserie. Our waiter added up our bill on the paper tablecloth, and that was that.

Bouillon Chartier, I’ve learned, is indeed a Parisian institution, as my Parisian friend promised me it was. Parisians and tourists alike flock here, and when we left, there was a line leading out of the courtyard all the way to the boulevard. I’m told the line moves fast, and given how quickly we were served, I believe it.

Bouillon means “broth” and was first served in 1855 by a butcher who wanted to provide cheap food for the workers at Les Halles, the original French fresh food market that was moved to the suburbs in the 1970s. The word came to mean the establishment serving the broth, and by 1900, there were more than 250 of these types of restaurants. Only a handful remain today. One of those is Bouillon Chartier, which was opened in 1896 by two brothers named Frédéric and Camille Chartier. Over its lifetime, it has had only a handful of owners. The food hasn’t changed in a hundred years and it is still cheap — the three of us ate for much less than we would have at our neighbourhood brasserie.

I expect I will give Bouillon Chartier another try the next time I am in Paris. My nieces have a lifetime of travelling ahead of them, and I have no doubt one day they will taste French cuisine as only the French can prepare it.

But I also know they will never forget their lunch at Bouillon Chartier in Paris. 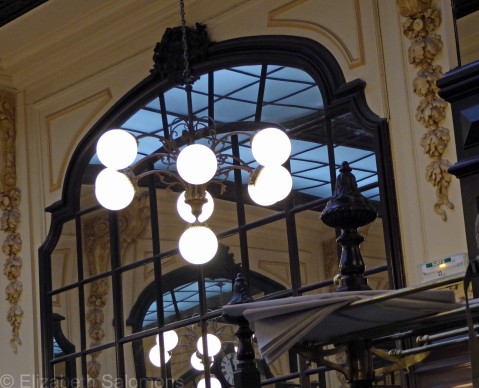