I went to a birthday party today. And oh, what a party. The Vancouver Symphony Orchestra hosted 100 free musical performances to mark 100 years since its first-ever concert on January 26, 1919. For 12 hours today, 1000 musicians performed across 10 stages, including several at the Orpheum Theatre, the symphony’s home since 1977. 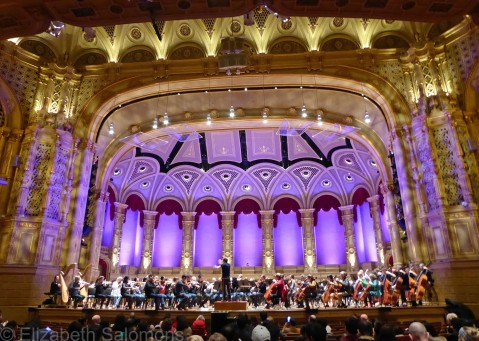 That’s where my friend and I headed early this morning. We wanted to catch the orchestra during its last rehearsal before tonight’s concert. I was thrilled — despite the occasional flashback to my sometimes tedious high-school band practices — to watch the symphony’s new (as of July 2018) Music Director Otto Tausk lead his musicians through a dress rehearsal of Mussorgsky’s Pictures at an Exhibition and Grieg’s Peer Gynt.

After a leisurely lunch, my friend and I returned for the afternoon and I was taken aback by how the crowds had grown since the morning. The lobby and auditorium were now filled to capacity. The most heart-warming sight were the dozens of strollers parked outside the box office; scores of parents had brought their toddlers to the Orpheum to introduce them to symphonic music. (Although we didn’t check out it out, there was also an Instrument Petting Zoo for the children.)

Vancouver is world famous for its natural beauty — which is a good enough reason to visit, no doubt. But culture? Not so much. That’s not what attracts the millions of tourists who visit Vancouver every year.

Even so, I personally think that the Vancouver Symphony Orchestra is the cultural jewel of this city and it is the arts organization I frequent the most.