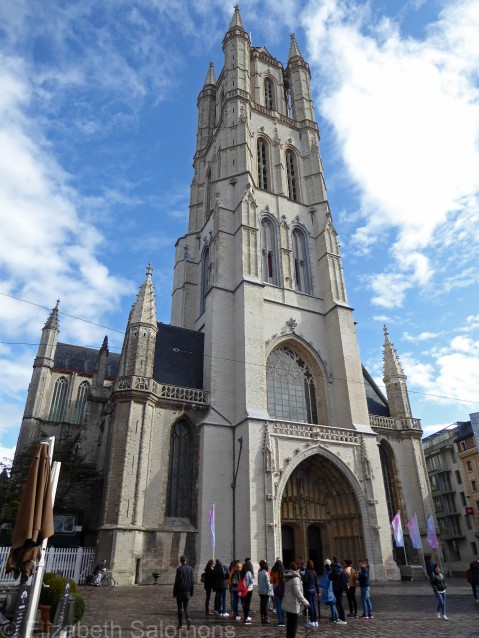 For the Fourth Sunday of Lent, I’m moving on to Gent. This is Sint-Baafskathedraal (Saint Bavo Cathedral). A church has stood on this site since one was consecrated to Saint John the Baptist in 942. The Gothic structure you see here was completed sometime in the mid-sixteenth century.

Around the same time, the diocese of Gent was founded. This church was selected as the diocesan cathedral, and rededicated as Sint-Baafskathedraal. Saint Bavo was a rather rambunctious, wealthy young man, who, after the death of his wife, gave away all his possessions and became a monk.

Displayed in the cathedral under high security is the magnificent Ghent Altarpiece by Hubert and Jan van Eyck. Known formally as The Adoration of the Mystic Lamb, it has survived iconoclasm, revolution, dismantlement, fire, theft, and war. I highly recommend stopping by Gent to have a look at it for yourself.