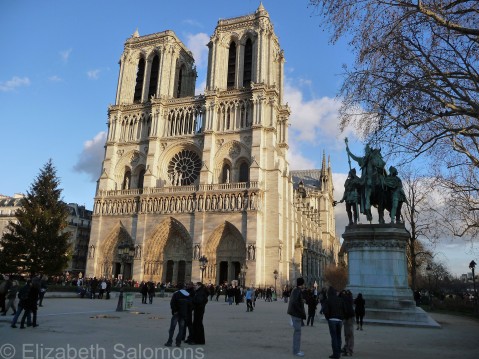 Four days ago, the world was stunned by the sight of Notre-Dame Cathedral in flames, and in tears at the possibility that it might collapse. Its salvation came down to a matter of minutes as the firefighters fought to keep the fire from spreading to the wooden frames of the bell towers. Had that happened, it would have been game over. The bells would have come crashing down, taking the two towers with them.

Since then, we’ve learned that Notre-Dame has fire monitors who inspected the wooden frame that held up the roof — known as la forêt (the Forest) — three times a day. We’ve also learned that just last year the Parisian firefighters carried out training exercises in how to rescue Notre-Dame’s artwork and relics. At the height of the fire, when it was thought the Cathedral was at risk of collapse, 100 of the 500 firefighters were busy moving those works of art to safety. They were following the protocol set in place long ago: first save the people, then save the art, then save the building.

But we’ve also since learned that Notre-Dame’s wooden roof structure had no sprinklers or firewalls, which contributed to how quickly the fire spread. And there has been a years-long battle between church and state as to who should pay for the overdue and badly needed restoration work that was underway. (All cathedrals in France are owned by the French state and leased to the Catholic church.)

One doesn’t need to be a person of faith to be impressed by Notre-Dame for its architectural beauty and its historical significance. Gothic architecture originated in France and Notre-Dame was among the first of the great cathedrals to be built. Construction began in 1163 and took 200 years to complete. Stained glass and flying buttresses were new ideas back then, and Victor Hugo called the result a “vast symphony in stone.” 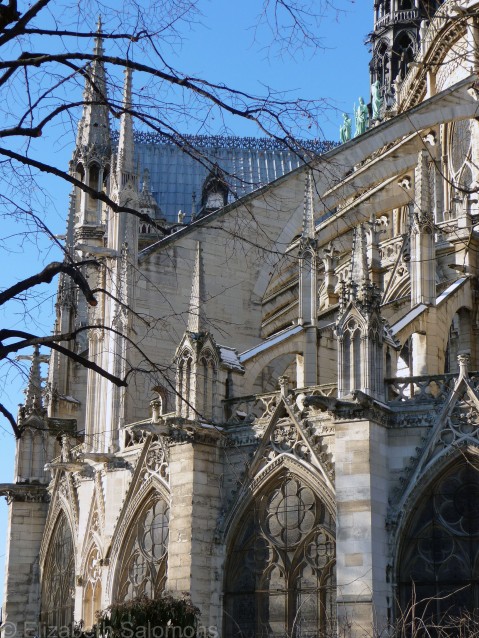 There is probably no symbol of France and French culture equal to Notre-Dame. It sits on the Île de la Cité, the heart of Paris, known as Lutetia some 2000 years ago when humans first settled along the Seine. The “snail” of the famous arrondissements of Paris begins directly in front of the Cathedral. Napoleon Bonaparte was crowned emperor in Notre-Dame in 1804; its bells toll at times of national significance, such as the end of Nazi occupation in 1944. Heavily damaged during the French Revolution, Notre-Dame has since survived other revolutions and uprisings as well as two world wars. That endurance is likely why, as a building, it is so close to the hearts of so many people.

That endurance is also likely why we take Notre-Dame for granted. On my last visit to Paris, I didn’t even bother to go inside. To be honest, I’ve never been much impressed by its interior. I find it dark and grimy compared to other European cathedrals and the crowds are unbearable. My nieces took one look at the long line of people snaking across the square in front and emphatically declared they were not waiting in line to see a church, even if it was Notre-Dame. I didn’t push it.

Instead, I took them around the back to show them where Notre-Dame’s real beauty lies: in its intricate exterior and its symphony of flying buttresses. 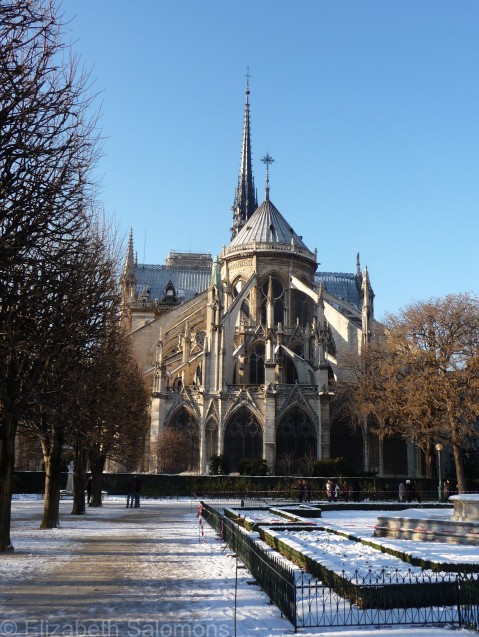 I get why people talk of Notre-Dame as if it were a sentient being. And if you think of it like that — as a living, breathing building — then this week’s fire is simply one more event in its long and sometimes turbulent life.

And therein lies hope for its future. All great cathedrals have been nearly destroyed and then restored. England’s York Minster suffered a devastating fire in 1984 — something I only learned about this week despite having visited that church several times. Its roof was rebuilt with English oak. Chartres Cathedral, just outside of Paris, lost its medieval roof in 1836. It was rebuilt with iron and copper. And because of restorations like these and others, the know-how needed to rebuild Notre-Dame exists, despite media reports that those skills are long gone.

This week happens to be Holy Week — one of the most significant weeks in the Christian calendar. Regular readers of this blog know how enamoured I am with ecclesiastical architecture, as evident by my annual Lenten series. I’m sure I am not alone. The most awe-inspiring architecture has always been built for the gods we worship. Think of the Pyramids at Giza, the temples of Angkor Wat, the Acropolis in Athens … 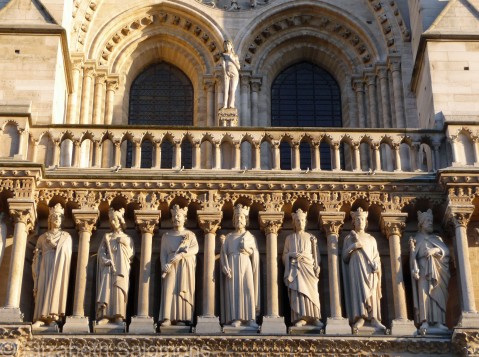 Today is Good Friday, the most solemn day of Holy Week that commemorates the crucifixion of Christ. As I looked up at the brand-new wooden roof of the cathedral in which I was worshipping, I found myself wondering how quickly it might burn if it were to ever catch on fire.

I pray I will never know.

4 responses to “Notre-Dame Is Burning”